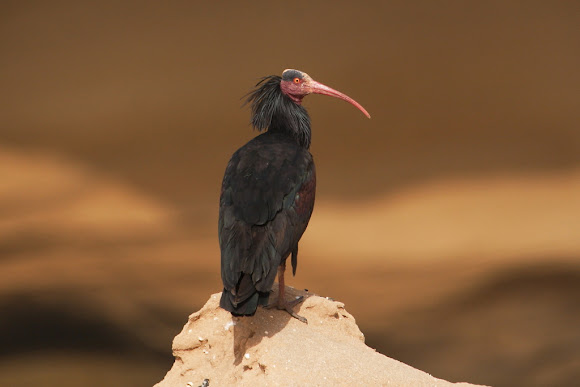 The Northern Bald Ibis is classed as critically endangered, despite it being one of the earliest officially protected species, thanks to a decree by Archbishop Leonhard of Salzburg in 1504. This strange but beautifully plumaged bird was widely known throughout Europe as the Waldrapp (meaning “Forest Crow”). It bred in large colonies on cliffs and castle ramparts throughout southern and central Europe, before it began a relentless march towards extinction. By 300 years ago it had disappeared from the whole of Europe and this pattern followed in the Middle East where finally it was only known from a single breeding population at Birecik in Turkey. This colony outlived dozens of others as it was protected by the local religious beliefs that the ibises migrated each year to guide Hajj pilgrims to Mecca. Around 3,000 birds summered and bred at Birecik in the 1930’s but only 400 in 1982, 5 pairs in 1986 which dwindled to one bird by 1990 that died the following year. It also occurred in North Africa and many colonies survived in Morocco and Algeria but this tragic pattern continued with the last colony in Algeria vanishing in the 1980’s. In Morocco 38 colonies remained in 1940, 15 in 1975, in 1989 the last migratory population in the Atlas Mountains died out and all that remained into the 1990’s were 4 breeding colonies at 2 locations on the coast of Morocco. The Waldrapp’s numbers continued declining despite intensive conservation efforts. Extinction, driven by loss of feeding habitat, nest disturbance, hunting and poisoning, seemed inevitable. However this fragile and tragic situation has improved with small increases in the breeding population at the colonies in Morocco (now estimated at approximately 500 birds) and in 2002, the dramatic discovery of a relict colony in Syria, where it has been declared extinct for 70 years. Sadly this tiny Middle Eastern remnant has declined from 7 birds at discovery to just a single pair and 3 juveniles this year. A semi-captive population still exists at Birecik in Turkey and reintroduction programmes are being planned elsewhere but the only readily accessible area to see this remarkable bird is coastal Morocco.

Very nice capture!
There is also a very small colony in the south of Spain.