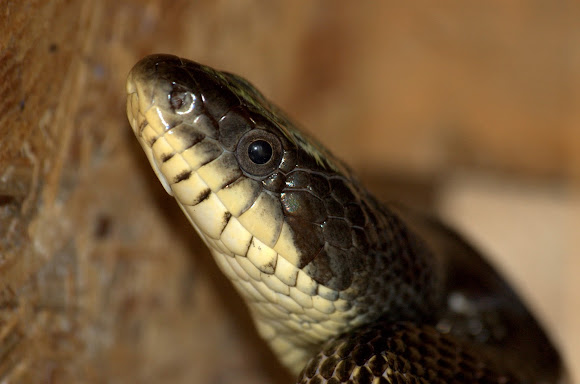 A medium to large serpent, gray rat snakes (silver racer) typically reach an adult size of 39" to 72" (3.25–6 feet/99 cm-183 cm), however, the record is 84.5"(7.041 ft/2.15m). Unlike other Elaphe obsoleta whose conspicuous juvenile pattern fades into adulthood, gray rat snakes do not undergo drastic ontogenetic changes in color, or markings. These snakes retain the juvenile pattern of dark elongate dorsal blotches separated by four, or more, pale gray body scales, a light gray crown with dark striping that forms an anteriorly facing spearpoint, and a solid band which covers the eyes and extends rearward to the posterior upper labial scales. The venter is usually off-white or pale gray with darker irregular blotches, and a double row of black spots behind the divided anal plate of the vent. The dorsal scale rows around midbody are usually weakly keeled. Because the gray rat snake shares its range with other members of its species, intergrades of black/gray and yellow/gray rat snakes are not uncommon.

In my chicken's nestbox.

Thanks guys! And thanks, Lisa, for the correct ID.

Beautiful photos!! They are never very cooperative for pics, but it looks like this one was posing for ya!

I guess that's not a bad trade for the opportunity for such a great shot! :)

Indeed it did. Only two eggs were missing. ;)

Did it get lunch in your chickens' nestbox?