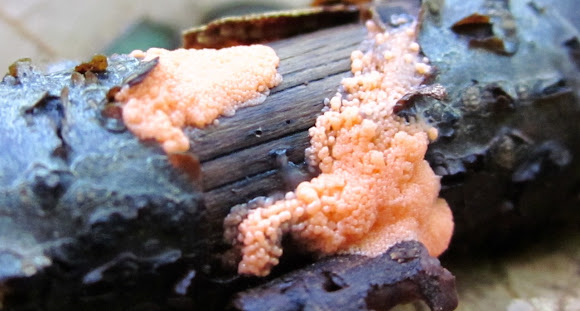 sporangia densely crowded, sitting in one of more than 5 cm groups, sessile, cilindisch or club-shaped (diameter) 0.3 mm to 5 mm high, pale to dark brown or reddish-brown to purple. plasmodium orange, pink or vermillion often pink, strawberry-like clumps of plasmodium. very common on dead wood of deciduous and coniferous ---The individual reproductive organs are cylindrical, rounded or slightly flattened laterally. They are up to five millimeters high and 0.2 to 0.4 millimeters in diameter. They are joined close to Pseudoaethalien. These are spread out flat to hemispherical shape, and they are 60 has a diameter of 10 to sometimes even extend 100 millimeters. Emerge from the surface of individual rounded limbs ( fruitingbodes ----> ( http://www.projectnoah.org/spottings/739... )

I suspect here the plasmodial state of tubifera ferruginosa, but because i haven,t seen knowingly one in real myself, i'm open for suggestions!! ----- The slime mold is found primarily on dead coniferous wood. Flying the type Epicypta testata lay their eggs in the plasmodium of the fungus. She lives as a larva and a nymph in the fruiting bodies and contributes to the spread of spores. The species is often found among others, like: Lycogala epidendrum, the milk-bonnet, Physarum nutans, Arcyria obvelata,Cribraria serpula and several species of the genus Hemtirichia