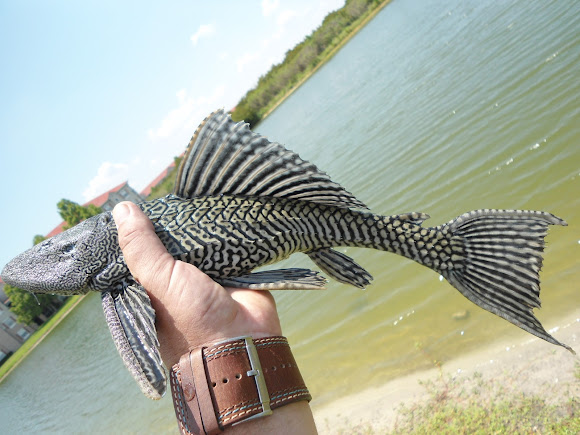 They also have an exo skeleton,which is awesome. Im gonna try to find my pic of a skeleton I found.

I caught it with my hand for a photo opp, Then released. As I understand yes they are native to the Amazon,but years ago they were released here in Florida to regulate some kind of vegitation. Now, as I have observed they are in the river systems,ponds,& lakes. They have eyelids & when you see them resting by the bank, they are often sleeping so I just grab em, Take a pic,then release. I hope this clears up the confusion. ;o)

Thanks for the info S. Frazier.

Ive caught & photographed dozens of them. I know theyre invasive,but I didnt have the heart to hurt them. Also Im not aware of any problems caused by them.

When you say you caught this, what do you mean? These fish are freshwater and originate from the Amazon... do you mean you took it out of a tank? Sorry, kinda confused! It's a gorgeous fish that's for sure! By the way, this kind of pleco is Pterygoplichthys pardalis :)

i saw it on the pet shop and they call it janitor fish.. in marikina river philippines, janitor fish treated as pest..

Where did you catch that sucker - LOL

What a beautiful fish. I've never seen one like this before. You say you caught it with your hand. I find that amazing. Nice catch.