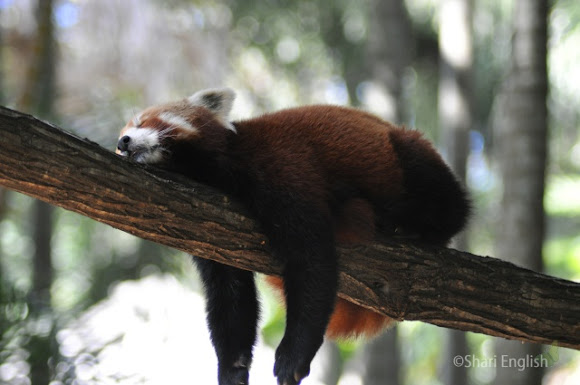 A small arboreal mammal, about the size of a large domestic cat. Fur is a reddish brown colour, darker on arms and legs. Face markings are white/cream and the long bushy tail has cream bands. Short front legs give it a waddling gait. Diet is predominantly bamboo but can also consist of eggs, birds, insects and small mammals. Often solitary and active from dusk to dawn. This animal is classified as VULNERABLE. Estimated only 10000 mature animals remain in the wild but continue to decline due mainly to habitat loss and poaching.

Native to eastern Himalayas and southwestern China found in the mountians and temperate forests. Prefers mixed deciduous and conifer forests with a dense bamboo understory.

This panda was not found in the wild, it was spotted at Alma Park Zoo just outside of Brisbane, QLD.

at the right place and right time

They are so gorgeous aren't they!

I wish I could fall asleep in such a position :)

OMG! Is so cute

they do don't they, what a life!

They do look really relaxed..