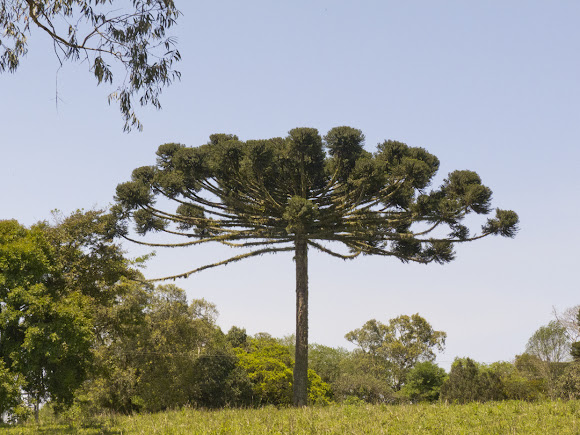 Araucaria are mainly large trees with a massive erect stem, reaching a height of 30–80 m. The horizontal, spreading branches grow in whorls and are covered with leathery or needle-like leaves. In some species, the leaves are narrow awl-shaped and lanceolate, barely overlapping each other, in others they are broad and flat, and overlap broadly. The trees are mostly dioecious, with male and female cones found on separate trees, though occasional individuals are monoecious or change sex with time. The female cones, usually high on the top of the tree, are globose, and vary in size between species from 7–25 cm diameter. They contain 80-200 large, edible seeds, similar to pine nuts though larger. The male cones are smaller, 4–10 cm long, and narrow to broad cylindrical, 1.5–5 cm broad. (From Wikipedia)

Araucaria is the tree simbol of state of Parana, Brazil. Because of massive extraction, it entered the list of threatened species. Currently, they are preserved by law. First picture shows a female cone, the second one shows a male one. Third picture shows the seeds, wich are edible, once boiled or baked. They are an very important source of food for a large number of animals (wich, of course, eat them in the raw form...)

interesting seed information! pine nuts are one of my favorite snacks!

Thnx asergio for the honor!

Emma, it is done.

this would be a great addition to the Seeeds and Seed pod mission. Please consider adding!
http://www.projectnoah.org/missions/8362...

Nice shape - would love to have one of those in my yard :)

Very cool to see these stately Araucaria. Thank you!