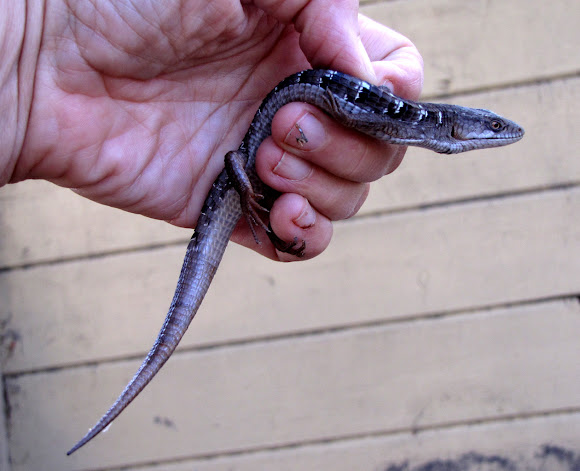 The southern alligator lizard has a long prehensile tail, up to twice the length of its body. Like many lizards, however, it can drop its tail if attacked, possibly giving it a chance to flee; the tail will regenerate, but will never be as long or richly colored as the original. Individuals with intact tails can reach up to about 50 cm in total length. The lizards can frequently be found near human habitation and are notable for their fearless self-defense; they will often bite and defecate if handled. In the wild they eat small arthropods, slugs, lizards, small mammals and occasionally young birds and eggs. (Wikipedia)

All of Southern California.

At first I thought this 7" Alligator Lizard was dead because he wasn't moving at all. I went in to get my camera and he was still there. In the second and first pictures his right arm is at his side which is not normally how these lizards "stand." When I (gently) picked him up, I felt something give, so I think he, and his arm, were caught in spider silk. He freed his arm, and when I put him down he moved off normally and hid. I'm always happy to see these in my garden because they eat bugs that decimate my vegetable garden. They are in turn food for Mockingbirds and other mid-sized birds. http://cannundrum.blogspot.com/2009/11/s...

Fabulous spotting! It looks as if this little one had to release his tail once already, due to the lack of patterning. He's a survivor for certain!

Wow! this one is really beautiful, I'm obsessed to have one.

And there are only ten of them I would love to have one of those :)