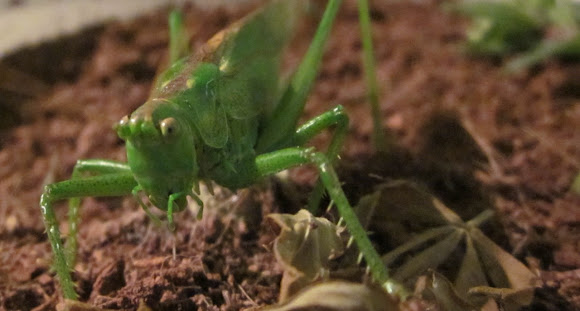 This grasshopper can bite painfully but it is not particularly aggressive. It is better to avoid holding the insect in the fist, because the bite is almost assured. They are fit to flight, but their real performances are quite modest. Most often it moves "on foot " or jump, which allows it to easily explore the bushes, trees and shrubs. --Tettigonia viridissima is carnivorous and arboreal. Its diet is mostly composed of flies, caterpillars and larvae. Unlike many grasshoppers it is essentially active in day and night, as testifyed by its endless crepuscular and nocturnal singing. --The morphology of both sexes is very similar, but the female has an egg-laying organ (ovipositor) that can reach a length of 23 to 32 23–32 millimetres (0.91–1.3 in). It reaches the end of the elytra and is slightly curved downward. The larvae are green and as the imago show on their back a thin brown longitudinal stripe. The ovipositor can be seen from the fifth stage, the wings appear in both genders from the sixth stage

Tettigonia viridissima, the Great Green Bush-Cricket, is a species of 'katydids crickets' belonging to the family Tettigoniidae subfamily Tettigoniinae. This species can be encountered from the Europe to Mongolia, especially in meadows, grasslands, prairies and occasionally in gardens

i think this one was sitting on my balcony,i opend the door to let some fresh air in, after some minutes she was hanging at the fly-net. i took her in as new model and she loved it. she always wanted to stand on the camera. after a little while she began to lay egg into the cricket/cat-walk (everything to see in the videos, 1 were she jumps on the camera and 1 at egg laying)[ http://www.youtube.com/user/rexalex84#p/... ]