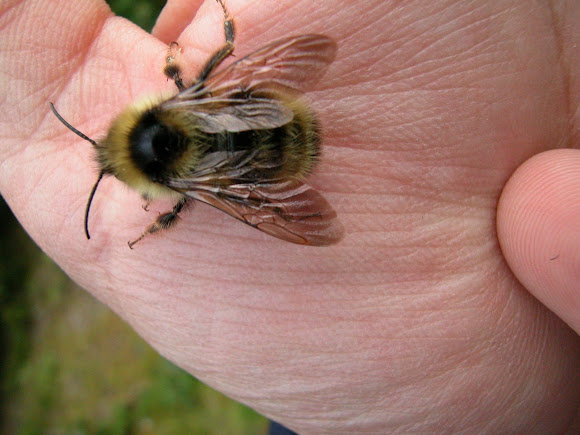 Male cuckoo bumble bee found resting on fireweed (Epilobium angustifolium) in the morning. Cuckoo bumble bees are cleptoparasites. The female (queen) will kill or subdue the queen of a well established bumble bee colony and forcibly (using pheromones and/or physical attacks) "enslave" the workers of that colony to feed her and her developing young. When her young emerge, they leave the colony to mate, and the females (new queens) seek out other nests to attack. Cuckoo bumble bees do not produce workers, only males and new queens. As such, they do not forage for the colony as a whole, just for themselves. Queen cuckoo bumble bees are often seen later in the season than other bumble bee queens, as they parasitize well-established bumble bee colonies. - some info from Wikipedia.

Cuckoo bumble bees were formerly categorized in the genus Psithyrus, but this grouping has now been sunk to sub-genus level within the genus Bombus.