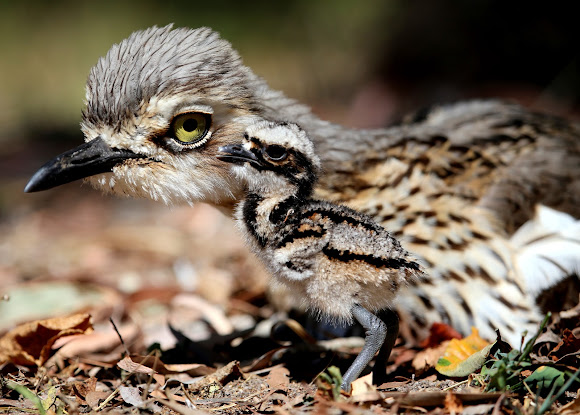 The Bush Stone-curlew, or Bush Thick-knee, is a large, slim, mainly nocturnal, ground-dwelling bird. It is mostly grey-brown above, streaked with black and rufous. It is whitish below with clear, vertical black streaks. The bill is small and black, and the eye is large and yellow, with a prominent white eyebrow. Both sexes are similar. Young Bush Stone-curlews are similar in appearance to the adults, but are paler, and a little browner in colour. Bush Stone-curlews are nocturnal birds (night birds), doing all their feeding and other activities at night.

Feeding: Bush Stone-curlews have a wide-ranging diet, but prefer to feed on insects, molluscs, small lizards, seeds and occasionally small mammals. Feeding takes place at night. During the breeding season, nesting birds will search for food in the vicinity of the nest site, while at other times, birds may travel large distances. All food is taken from the ground. Breeding: Bush Stone-curlews have a remarkable courtship dance. Individuals stand with their wings outstretched, their tail upright and their neck stretched slightly forward. The birds will stamp their feet up and down, like a soldier marking time. This courtship ritual is repeated for an hour or more at a time and is accompanied by loud and constant calling. Eggs are laid in a shallow scrape in the ground and both adults share the incubation and care for the young. Hunting by the introduced European red fox is a major threat to the survival of many species of native Australian fauna. Smaller mammals and ground-nesting birds such as the Bush Stone-curlew are at greatest risk. The main cause of decline of the bird in south-eastern Australia has been clearing and continued fragmentation at least 85 per cent of habitat in Victoria. Stock can also trample curlew eggs. However, predation by foxes, particularly in areas where fallen timber has been removed, has become a major concern. Foxes often prevent the birds from nesting successfully.

Hi Mark, Congrats on your publication, a stunning image and so well deserved. Have tried sending private email but my system is being odd at present. Will be in touch soon as.
Bob

Thanks to all for your comments on this spotting.

Awesome series Mac,realy cute and with great photos,congrats on the very well deserved SOTD and thanks for sharing your super spotting page

So cute. Australia and cairns is on my list

Congrats Mac! Still can't get over how adorable that little guy is!

Congrats Mac, your great series of this near-threatened bird has earned you Spotting of the Day! Bush stone-curlews are very protective parents and will carry their chicks off under their wings to keep them safe from potential predators.