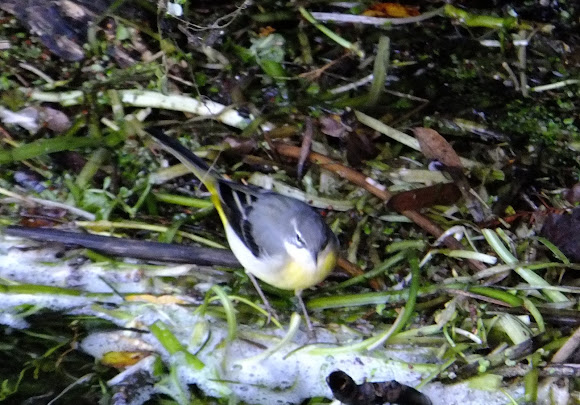 The grey wagtail is more colourful than its name suggests with slate grey upper parts and distinctive lemon yellow under-tail. Its tail is noticeably longer than those of pied and yellow wagtails. They have gradually increased their range in the past 150 years and in the UK have expanded into the English lowlands from the northern and western uplands. They are badly affected by harsh winters, and because of recent moderate declines it is an Amber List species.

Where to see them: Found over most of the UK, with the exception of the Northern and western isles of Scotland. Likes fast flowing rivers in summer their greatest densities are in the hills of England, Scotland and Wales. In winter they can be seen around farmyards and lowland streams, even in city centres. Scarce in central and eastern England in summer and from upland areas in winter. What they eat: Insects and other invertebrates that it picks up from the ground, from shallow water of from snatches out the air. Insects include midges, stoneflies, mayflies, beetles and ants. Other prey includes spiders, small water snails, freshwater shrimps and tadpoles. Population: In the UK there are ~38,400-46,200 breeding pairs.