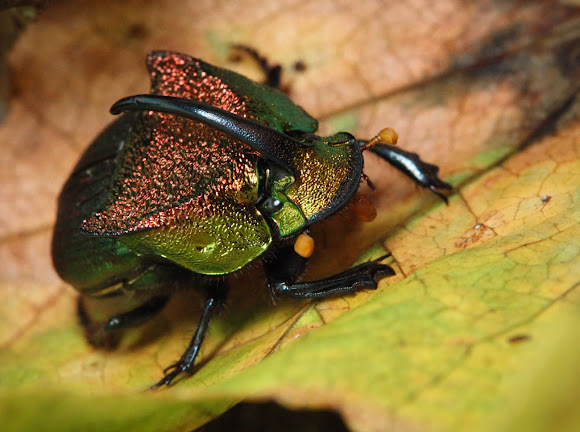 Common Name: Dung beetle Scientific Name: Phanaeus vindex MacLachlan Order: Coleoptera Description: Males and female beetles are between ½ and 1 inch long and overall metallic blue-green and copper. The front of the head is flattened and golden bronze. The male has a long, curved horn extending from the front of the head (clypeus) while the slightly larger female has a tubercle. The front legs are modified for digging. There are a number of dung beetles or "tumblebugs" in the subfamily Scarabaeinae (Canthon, Copris, Deltochilum and Dichotomus and other genera) that are important in recycling animal feces. Some are small, dark dung-feeding scarab species (e.g., Ataenius and Aphodius species). One species, Onthophagus gazella Fabricius, was introduced by USDA scientists in the 1970's and is now common throughout the state. In parts of Texas, they remove 80 percent of the cattle droppings. Most species are dull to shiny black and 1-3/8 inch or less in length with wing covers (elytra) that may have ridges (striae). They are often attracted to lights at night. These beetles are related to the sacred scarab of ancient Egypt, Scarabaeus sacer Linnaeus.

Mouthparts are for chewing. Larvae feed on animal excrement buried by the adults. These beetles are rarely encountered unless an effort is made to examine fresh potential larval habitats! Animal excrement is rich in insect fauna and can yield these strikingly beautiful beetles. Beetles can be washed to remove debris.

Oh and thanks for the compliment :)

I get to see one or two a year. If you smear fresh and hot dog poo in the grass on a breezy summer day you may see one fly in. I know that is just NASTY, but it works.

Fun fact! It’s estimated that dung beetles save the United States cattle industry $380 million annually by repurposing livestock waste. The amazing recycling ability of dung beetles has even been proposed as a way to help curb global warming.

Thanks for all the compliments everyone :)
project noah ROCKS because of members like you!

That is a fabulous beetle!

W O W !!...... thanks for the recognition! This made my day. Thank you everyone for the wonderful compliments. :)

This is one handsome guy ! great spotting and congratulations !!.
I read somewhere that females fight each other for access to fresh dung to lay their eggs - maybe they should be the ones to have the horns instead of the tubercles !!!
This is a great picture and thanks for sharing it ..

Congratulations Rick! This beauty was chosen as Spotting of the Day!

"The Rainbow Scarab Beetle is a North American dung beetle. This species, along with other dung beetles, plays an important role in nature: reducing fecal material in nature and thereby reducing the number of disease spreading flies."

This is a beetle I'm planning on finding this spring--I've gotta see this color for myself.

and 82 other people favorited this spotting