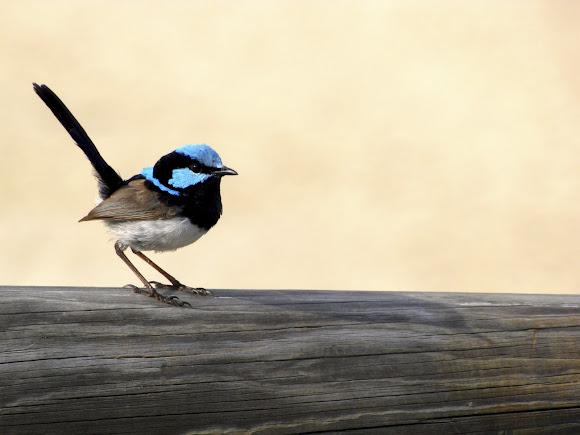 The males during the breeding season is very distinct with it's sapphire blue head and it's chirping that you will hear quite often when he is around. The females are a dull brown with a small orange 'mask' stretching from the eyes to the beak. They are small birds that flitter from bush to bush. During the non-breeding season they are a dull brown for both the male and female.

Superb Fairy-wrens are found south of the Tropic of Capricorn through eastern Australia and Tasmania to the south-eastern corner of South Australia.

These are very beautiful birds! I saw them when I drove down to NSW as well as Dolphins, Water Dragons, some type of Skink and a type of beautiful King Fisher

Awesome photo. I would love to get a shot of this fella :D

The Birds in Backyards project is running a survey to find where these birds are to found. If you have not already done so I am certain they would love to get information from you on this spotting http://www.birdsinbackyards.net/surveys/...

These can be so difficult to get shots of. Great work!

Congratulation on this wonderful SotD !

Thanks everyone! I feel so privileged and lucky to get an honour like this!! : )

Beautiful capture Uncle Minty,congrats on the SOTD,thanks for sharing and a happy Australia day :-)

WoooooHoooooo!!! Congrats on your SOTD!

Congratulations on the SOTD for this beautiful capture!

Congratulations on your SOTD Uncle Minty

Congratulation on the SOTD.

These were one of the birding highlights of our trips to Australia. Congratulations!

Beautiful passerid! Congratulations on the SoTD!

Happy Australia Day to all our friends down under, & congrats Uncle Minty, we have chosen this stunning little bird as spotting of the day to mark the occasion!

As well as dazzling them with their vibrant blue plumage, male fairy wrens present their mates with colorful petals as part of a courtship display – who said that romance was dead!

the colors are amazing :-)

Thanks! I'll add it now!

So nice Uncle Minty!!!! you can add this to the new "color blue" mission:
http://www.projectnoah.org/missions/8382...

and 64 other people favorited this spotting