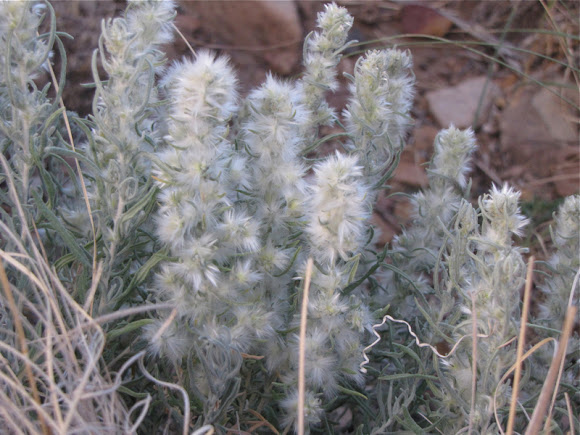 An erect to spreading, low- growing, long-lived half-shrub (easily mistaken for perennial weed) ubiquitous throughout the semi-arid areas of the US west and southwest. central woody stem arising from a woody crown. Annual stems are wooly and branched, 8 inches and sometimes taller, and herbaceous on dwarf forms. Stems on taller forms are herbaceous to woody throughout. Winterfat has an extensive fibrous root system and a deep penetrating taproot, an adaptation to low precipitation environs. The inflorescence is a spike. Plants are monoecious with staminate flowers above the pistillate ones or occasionally they are dioecious. (another adaptation) Pollination usually occurs between plants, but self-pollination may occur on monecious plants. As you can see from the wooly seed heads, wind is the main dispersal agent. Growth begins in early to mid spring, flowering occurs from mid spring to early summer, and seed maturity is reached by mid to late fall.

The specimen photographed was found growing in pockets of lava bed in east central New Mexico (Valley of Fire, BLM-managed land). Winterfat is most common in the 7-16 inch annual precipitation zones, but has been found in areas with less than 6" of annual precipitation and in areas with greater than 20" annual precipitation. It is found from near sea level to 10,000 feet elevation. It occurs in salt desert shrub, pinyon juniper, sagebrush grass and near the edges of some forested plant communities. Winterfat grows well on a wide range of soils, although it prefers more basic or limey soils. It tolerates moderate to highly saline conditions, but is not tolerant of acidic soils. It does not tolerate flooding or extended wet conditions.

Although a few plants around my Chihuahua desert home resemble winterfat, they sport tiny lavender-pink flowers that also have tiny fuzzy silky pilose hairs, a smaller version of the longer white seed hairs of winterfat. However, I do recall seeing winterfat in the semi-arid high grasslands of Central and Eastern Oregon, where it is called 'winter sage.' It is considered very good browse for wildlife and is extensively utilized by rodents, rabbits, antelope, deer, elk, and bighorn sheep. It is also serves (and is planted for) excellent erosion control because of its width and deep taproot.