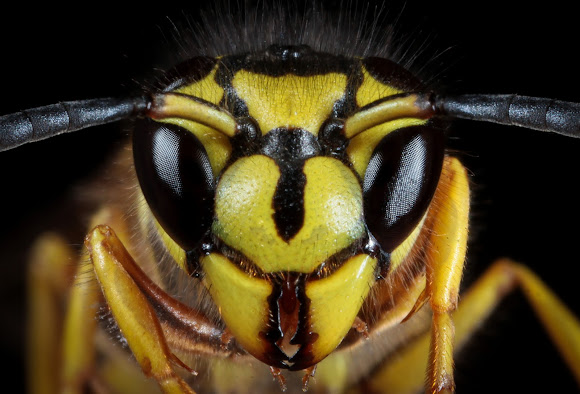 Yellowjackets are often called "bees" as they are similar in size and appearance, and both sting, but are actually wasps. A typical yellowjacket worker is about 12 mm (0.5 in) long, with alternating bands on the abdomen; the queen is larger, about 19 mm (0.75 in) long (the different patterns on the abdomen help separate various species). Workers are sometimes confused with honey bees, especially when flying in and out of their nests. Yellowjackets, in contrast to honey bees, are not covered with tan-brown dense hair on their bodies, They do not carry pollen and do not have the flattened hairy hind legs used to carry it. They have a lance-like stinger with small barbs and typically sting repeatedly,[1] though occasionally the stinger becomes lodged and pulls free of the wasp's body; the venom, like most bee and wasp venoms, is primarily only dangerous to humans if allergic, unless a victim is stung many times (main article: Bee sting). All species have yellow or white on the face. Mouthparts are well-developed with strong mandibles for capturing and chewing insects, with a proboscis for sucking nectar, fruit, and other juices. Yellowjackets build nests in trees, shrubs, or in protected places such as inside human-made structures (attics, hollow walls or flooring, in sheds, under porches, and eaves of houses), or in soil cavities, mouse burrows, etc. They build them from wood fiber they chew into a paper-like pulp.

Vespula species, in contrast, build concealed nests, usually underground. Yellowjacket nests usually last for only one season, dying off in winter. The nest is started by a single queen, called the "foundress". Typically, a nest can reach the size of a basketball by the end of a season. In parts of Australia, New Zealand, the Pacific Islands, and southwestern coastal areas of the United States, the winters are mild enough to allow nest overwintering. Nests that survive multiple seasons become massive and often possess multiple egg-laying queens.[3][4]

these things creep me out. awesome shots though