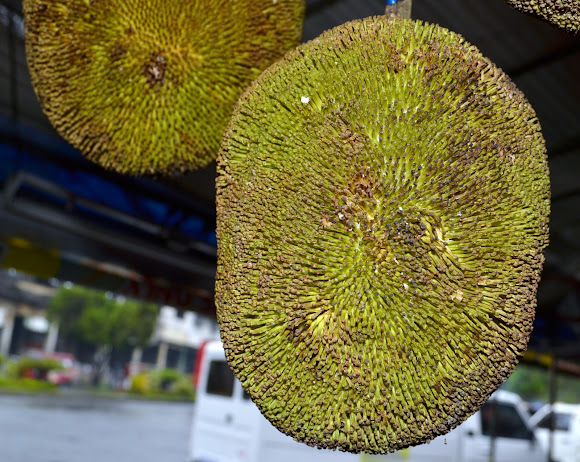 The marang, also called johey oak, green pedalai, madang, tarap, terap, timadang, or breadfruit cousin, is a tree native to Borneo and Palawan. It is closely related to the jackfruit, cempedak, and breadfruit trees. As indicated by the scientific name, the fruit has a strong scent, and is considered superior in flavour to both Jackfruit and Cempedak. Once opened, the marang should be consumed quickly (in a few hours), as it loses flavour rapidly and fruit oxidizes. The seeds are also edible after boiling or roasting.

The tree is not cold tolerant (as is the breadfruit). It can grow between latitude 15º north and south, and in coastal regions where temperatures never stay under 7 °C. It is cultivated for its fruit in Indonesia, Malaysia, the Philippines, and southern Thailand. The species is largely grown for local consumption; the short shelf-life of the fruit limits its wider use.

Spotted at a fruit stand in Davao City, Philippines.

You seemed to chosen a good tarap - looks delicious.

Been eating this fruit all my life and have never gotten tired of it. The advantage of living in North Borneo....

I think its called as Tarap in Malayan region....
http://en.wikipedia.org/wiki/Artocarpus_...