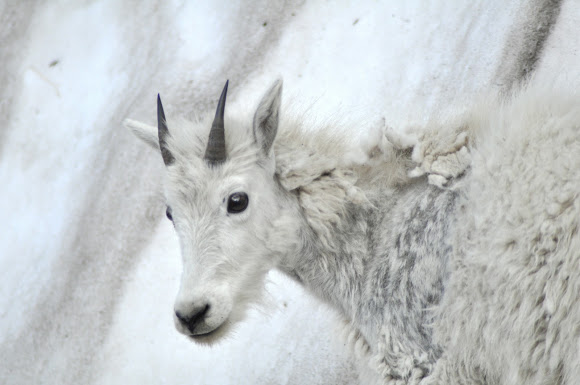 A beautiful young Mountain Goat spotted just as we were leaving the park in late July. You can see that he is shedding from his uneven coat.

The mountain goat inhabits the Rocky Mountains and Cascade Range regions of North America, from northern Washington, Idaho and Montana through British Columbia and Alberta, into the southern Yukon and southeastern Alaska. Its northernmost range is said to be along the northern fringe of the Chugach Mountains in southcentral Alaska. Introduced populations can also be found in such areas as Wyoming, Utah, Nevada, Oregon, Colorado, Texas, South Dakota and the Olympic Peninsula of Washington. Mountain goats are the largest mammals found in their high-altitude habitats, which reach elevations of 13,000 feet (4,000 m) or more. Although they sometimes descend to sea level in coastal areas, they are primarily an alpine and subalpine species. Throughout the year, the animals usually stay above the tree line, but they will migrate seasonally to higher or lower elevations within that range. Winter migrations to low-elevation mineral licks often take them several or more kilometers through forested areas.

Oops! I forgot to add a link to the mission:
http://www.projectnoah.org/missions/7959...

This photo was take in Glacier National Park. If you've ever been I'd love for you to join the mission I just created and share your wonderful photos of the flora and fauna of the park.