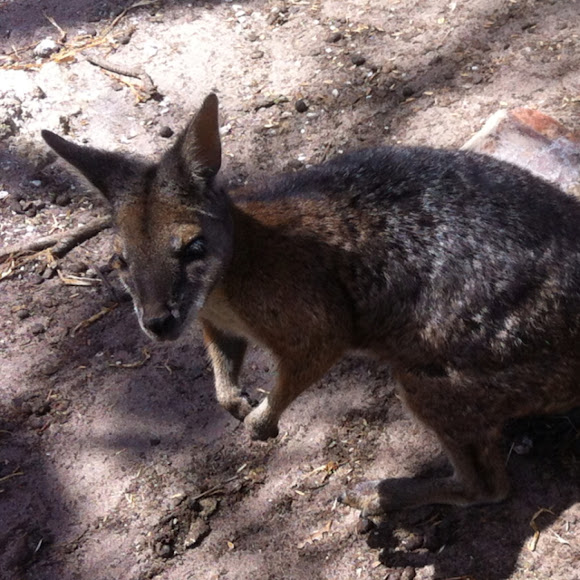 Habitat: Dense, low vegetation for daytime shelter and open grassy areas for feeding. This species inhabits coastal scrub, heath, dry sclerophyll forest and thickets in mallee and woodland. Distribution: The Western Australian subspecies of the Tammar Wallaby was previously distributed throughout most of the south-west of Western Australia from Kalbarri National Park to Cape Arid on the south coast and extending to western parts of the Wheat belt. The Tammar Wallaby is currently known to inhabit three islands in the Houtman Abrolhos group (East and West Wallabi Island, and an introduced population on North Island), Garden Island near Perth, Middle and North Twin Peak Islands in the Archipelago of the Recherche, and several sites on the mainland - including, Dryandra, Boyagin, Tutanning, Batalling (reintroduced), Perup, private property near Pingelly, Jaloran Road timber reserve near Wagin, Hopetoun, Stirling Range National Park, and Fitzgerald River National Park. The Tammar Wallaby remains relatively abundant at these sites which are subject to fox control. They have been reintroduced to the Darling scarp near Dwellingup, Julimar Forest near Bindoon, state forest east of Manjimup, Avon Valley National Park, Walyunga National Park, Nambung National Park and to Karakamia and Paruna Sanctuaries.

Behaviour: The Tammar Wallaby is nocturnal. During the day they rest in low scrub and, although they begin to move at dusk, they do not leave the scrub until after dark and return to it before dawn. Individuals have defined home ranges (area of occupancy) that overlap the home ranges of others. While several wallabies have been observed feeding in the same area, no social grouping has been observed except between females and their young at foot. Diet: The Tammar Wallaby is herbivorous, and its diet consists mostly of grasses. Evidence suggests it requires drinking water for its survival. One study found up to 24 plant species in the diet, including Gastrolobium bilobum, Danthonia setacea, and Corymbia calophylla. Breeding: The breeding cycle is well known only for the Kangaroo Island subspecies (Macropus eugenii. decres). The Tammar Wallaby is one of only two macropod species that show a strictly seasonal pattern of breeding. Most young are born from late January to March and within a few hours of giving birth the female mates and the resulting embryo remains dormant during lactation. The dormant embryos are reactivated within a few days after mid December, and the young enter the pouch about 40 days later, 12 months after the mating at which they were conceived. The single young is suckled in the pouch for eight to nine months and leaves the pouch in September or October (October – November in Western Australia). Females become mature at about nine months while they are still suckling, but males do not become mature until nearly two years old. The rate of reproduction is high with more than 90% of all females carrying a pouch young by the end of the breeding season. In some years many pouch young are lost, particularly by one-year-old females. In all years mortality is high among juveniles during their first summer and may reach 40%. Subspecies: Three subspecies are recognised: • Macropus eugenii derbianus (Western Australia) • Macropus eugenii decres (Kangaroo Island, South Australia) • Macropus eugenii eugenii (South Australian mainland) Saw this wonderful wallaby at the Victor Harbour wildlife park (Urimbirra) Information for this sighting came from this website: http://www.dec.wa.gov.au/publications/do...

I didn't realise they were so small. Lovely spotting, and awesome info.