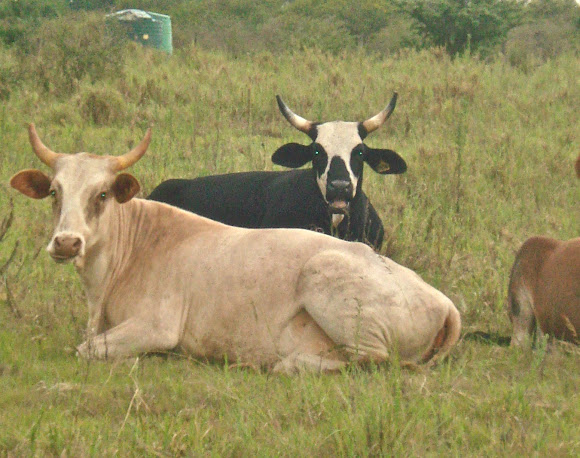 The Nguni cattle breed is indigenous to southern Africa. A hybrid of indigenous and Indian cattle they were introduced by the Bantu tribes of southern Africa from the north of the continent. They are medium sized, adapted to grazing on the Highveld. Nguni cattle are known for their fertility and resistance to diseases, being the favourite breed amongst the indigenous Bantu people of Southern Africa. They are characterised by their multicoloured skin, which can present many different patterns, but their noses are always black-tipped. The ancestors of Nguni cattle were brought by the Xhosa, Zulu and Swazi people, during their migration to South Africa between 600 and 700 AD. Since then, these animals have played an important social and economic role in the development of these societies and are used as a bride's dowry. The number of animals held by a village or individual determined much of their importance to the rest of the world. King Shaka of the Zulus understood this cultural and economic importance and seized control of the Nguni herds on his dominions. Shaka also bred the Ngunis according to colour patterns in order to produce skins for the several regiments of his army, henceforward recognized by them. His elite personal guard was recognised by pure white, from animals of the royal herd, the inyonikayiphumuli.

I took this photo only because I thought the markings on the face of the black cow looked like a skull!

Wow, I've never seen this breed of cow before. Cool!