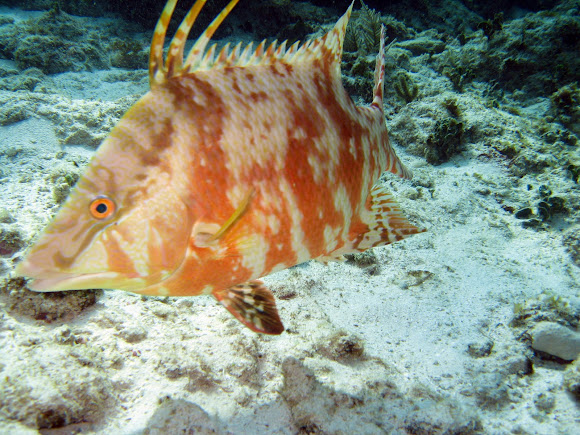 Photo take at -50 ft in a Caribbean reefThe hogfish is characterized by a large laterally compressed body shape. It possesses a very elongated snout which it uses to search for crustaceans buried in the sediment. Interestingly it is from this very long “pig-like” snout and its rooting behavior that the hogfish gets its name. The caudal, or tail fin, is somewhat lunate and the pectoral fins are along the lateral sides of the body with the paired pelvic fins directly below. A prominent black spot behind the pectoral fins differentiates male from females. The dorsal fin, usually is composed of three or four long dorsal spines followed by a series of shorter dorsal spines.

The hogfish is one of the larger species of wrasses and is found in the western Atlantic Ocean with a range from Bermuda, south through the Caribbean Sea and northern Gulf of Mexico, continuing to the north coast of South America. Hogfish are very abundant in the Florida Keys and are a valuable economical important species among fisherman.

Hogfish is a recreational important species. It is a commonly targeted species for many spear and reef fisherman and is regarded highly by many for its taste and food value. The hogfish is currently listed as "Vulnerable" with the World Conservation Union (IUCN).