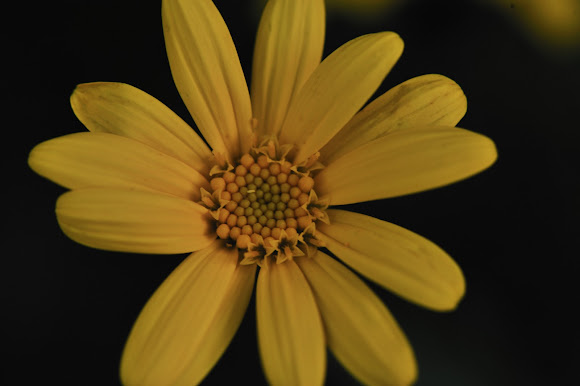 Growing to 6-feet tall and wide, Euryops, also known as the shrub daisy, is a tall, evergreen shrub bearing yellow, daisy-like flowers throughout the year. The leaves are green and deeply divided growing from numerous stems. The name resin bush is applied generally to Euryops species and is a direct translation from the Dutch name harpuis bosch from the Dutch word hars (resin) and puisje (a small pimple), referring to the resinous secretion exuding from the stem and branches in the form of small pimply drops.

Euryops is a member of the daisy family (Asteraceae) and consists of 97 species that occur in Africa with one that extends into the Arabian Peninsula and Socotra. There are 89 species in southern Africa where they are widespread. Other species at Kirstenbosch include: E. pectinatus, E. virgineus, E. annae, E. abrotanifolius, E. tysonii, E. linearis and E. speciosissimus and a hybrid between E. pectinatus and E. chrysanthemoides called 'Kirstenbosch'.

Family : Asteraceae (Daisy Family) Common names : golden daisy bush, daisy bush, resin bush (Eng.), geelmadeliefiebos, geelmargriet, harpuisbos (Afr.) The genus name Euryops is derived from the Greek eurys meaning large and ops an eye, referring to the large flowers. The species name chrysanthemoides means resembling a chrysanthemum. The genus Chrysanthemum means gold flower from the Greek chrysos gold and anthemon a flower. Although there are no recorded uses for this species, other Euryops species were used in the past and this species was quite likely used in the same way. Euryops species are rich in resin, which sometimes appears as blobs on the stems and twigs. This resin was greatly esteemed at one time, by both the Khoi and the colonists, for its alleged medicinal properties. It was used as a substitute gum, and to preserve leather, like boots and saddles. Its attractive dense foliage and bright flowers and its free-flowering nature have made Euryops chrysanthemoides a popular pot plant in Europe, Japan and America as well as in its native land where it is sold in garden centres and supermarkets. The flowers do not close overnight or indoors and last well in posies and small arrangements.