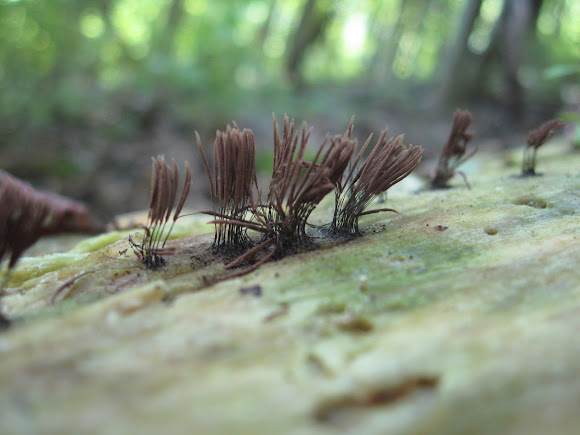 Black stalks support the sporangia, which are the brown cylindrical parts. Grows to 2 cm tall.

Without a spore print, there's no way to reliably get this slime mold down to species. This slime mold may look like a fungus, but it's not: slime molds and fungus are in two separate phyla, quite the separation. The plasmodia of the slime mold creep along the wood, engulfing any food, and sending up those tall reproductive structures, which bear spores. These spores are carried off by the wind, and are also released when physical pressure (such as an animal brushing against the stalks) is applied. Found at Barbara A. Beiser Field Station.

I'm looking at my copy of A Field Guide to Australian Fungi, and your photo most closely resembles that of Stemonitis axifera spores, which is described as globose, finally warted, brown.

While looking up some information on this species, I was led to a book about slime molds. It was only $10, so I should be able to learn much more in about a week! :)