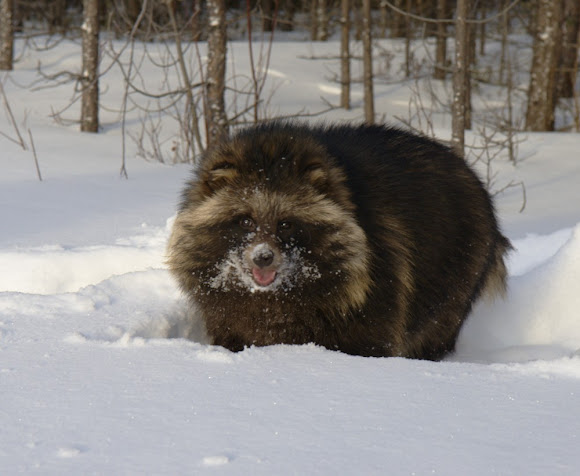 The raccoon dog is considered a basal canid species, resembling ancestral forms of the family. Among the Canidae, the raccoon dog shares the habit of regularly climbing trees only with the North American gray fox, another basal species. The raccoon dog is named for its resemblance to the raccoon (Procyon lotor), to which it is not closely related. Native East Asian raccoon dog populations have declined in recent years due to hunting, fur trade, urbanization, an increase of animals associated with human civilization such as pets and abandoned animals, and diseases that may be transmitted between them. Following its introduction into central and western Europe, however, it has been treated as a potentially hazardous invasive species. (Wiki)

Um...This is the most awesome thing I have seen all day! Awesome spotting!!!

Wow what a cute creature :) and it looks pretty big or it is just pretty fluffy :)

Thank you radbrad16, it is not dangerous to humans :)

Nothing to be afraid of it is very cute and only the size of a small dog...

Thank you very much Martin :)

What a brilliant series !! Wow !

It is not really related to a racoon only it's appearence...

Awesome! I did not know there was raccoons also in Europe. And how nice and fluffy!

The same here Stian, they might be right, but I don't think they will ever become a pest as other invasive species sometimes become...

They are blacklisted because people say the ruin the fauna, but they look so harmless

It don't seems right because it looks so cute....

We have the same name in Norway Jeannette! We have this animal in Northern Norway too but they are blacklisted as unwanted...

Yes, it is almost the same in Danish, mårhund :) As you can see in my note unfortunately it isn't welcome here...

It was very cute, it reminded me of my dog except for the colour, as he is white :)

I looked up the word, to see what it was in Swedish. Realized, if it was in northern Finland, they must be in Sweden too, I'd never seen it before and I'm from there! Turned out the word was 'mårdhund', and I have heard that word, but didn't know anything about them. Marvellous ...would love to see one in real life :)

Yes, they live in Europe but are native from East Asia.

I have edited the description so it's more readable, I agree It wasn't the best copy and paste from wikipedia...

Yes, it is a lovely animal, unfortunately not well seen everywhere...

What a gorgeous animal! I didn't even know they existed!

Thank you crobin and patty :)

Its like a mixture between a raccoon, a bear and a dog; it looks so sweet. Nice pictures =)

Thank you very much António :)

Jeannette, thanks. got it.. just fantasizing !