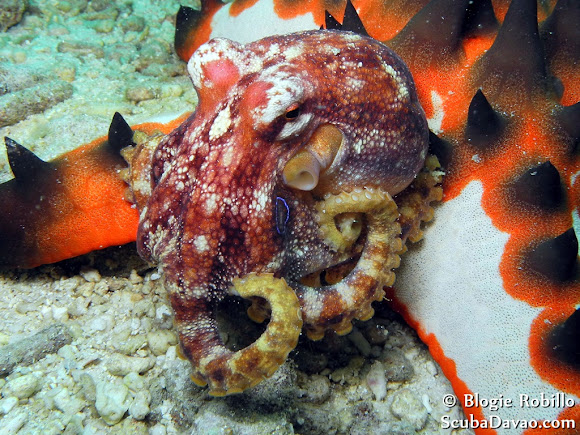 This octopus has one blue ring on either side of its head, which it displays to warn off potential predators. It can also change its color, as you can see in the 4th picture. It's said that this type of octopus is very rare.

Sandy and rubble areas of coral reefs, at depths of 1 to 40m.

Spotted this octopus at a depth of about 40 feet, during a day dive. It was about twice as big as my hand if it had its tentacles stretched out.

No, patty. The octopus was actually pretty tiny. But if it had its tentacles spread out in all directions then it would probably reach twice the size of my hand. This starfish was about 50% larger than my hand. :)

What a magnificent octupus! Amazing! So, the octopus was about twice as big as your hand, that is to say: the starfish was enormous! =)

What an awesome spotting! Thank you for sharing.

Yea, We already know that the octopus in general, are a lot smarter than dogs and some scientists are wondering just how complex their intellect really is!! So, I guess this one is no exception..

Thanks, Nicholas! Hmmm... No, I don't think the octopus and the sea star have any real symbiotic relationship. Perhaps the octopus was just trying to use the starfish as a shield against us pesky divers. :D

Symbiotic relation with the sea-star, or just a passer-by I wonder??
Very nice series.

Thanks, Palaimon! Currently I'm using a Nikon Coolpix P7000 in a Fantasea FP7000 housing. Sometimes I get to use an external strobe, a Sea&Sea YS01, which I borrow from a friend.

Amazing picture! Really nice colors.
What kind of equipment do you use?