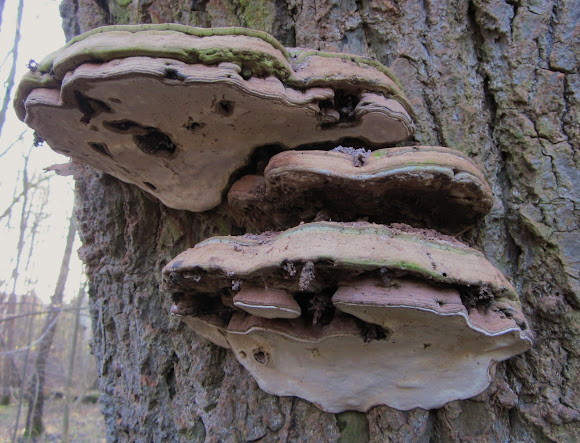 F. fomentarius has traditionally seen use as the main ingredient of amadou, a material used primarily as tinder, but also used to make clothing and other items. The 5,000-year-old Ötzi the Iceman carried four pieces of F. fomentarius, concluded to be for use as tinder. It also has medicinal and other uses. The species is both a pest and useful in timber production. Fomes fomentarius (commonly known as the Tinder Fungus, Hoof Fungus, Tinder Conk, Tinder Polypore or Ice Man Fungus) is a species of fungal plant pathogen found in Europe, Asia, Africa and North America. The species produces very large polypore fruit bodies which are shaped like a horse's hoof and vary in colour from a silvery grey to almost black, though they are normally brown. It grows on the side of various species of tree, which it infects through broken bark, causing rot. The species typically continues to live on trees long after they have died, changing from a parasite to a decomposer.Though inedible ( http://www.mushroomexpert.com/fomes_fome... )

==Fomes fomentarius (Tinder conk mushroom, Tsuriganetabe) -contains compounds with anti-cancer activity. --This mushroom can be used to treat escherichia coli, pseudomonas aeruginosa. ( http://www.medicalmushrooms.net/fomes-fo... ) === Other uses for Fomes fomentarius, as described by Peintner et al. are: Cauterization substance for wounds (described by Hippocrates in the fifth century BC) A styptic to stop bleeding-- used by surgeons barbers and dentists (sometimes called the "agaric of the chirurges" or "surgeon's agaric" Remedy against dysmenorrhea, hemorrhoids, and bladder disorders in Europe Diuretic, laxatives and nerve tonic in Indic folk medicine Treating cancers of the esophagus, stomach and uterus in China Used in smoking rituals in western Sibera and Hokkaido, burning the fruiting bodies overnight to banish evil spirits Making clothing such as caps and chest protectors (after pounding) As pincushions to prevent pins and needles from rusting Used by entomologists to mount their delicate insects Used in Siberia as snuff or mixed with tobacco Sold for use in fly fishing as "amadou," which is used to absorb excess water from flies ( http://botit.botany.wisc.edu/toms_fungi/... )