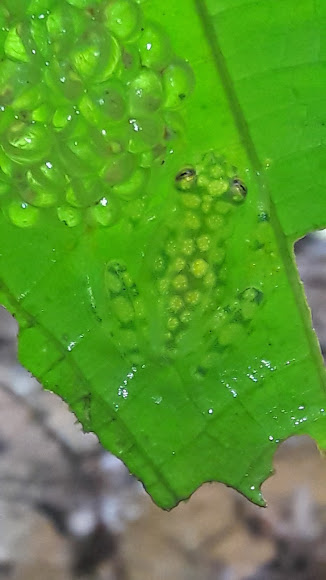 This is a small glass frog, (adult males are about 2 cm and adult females measuring 2.5 cm It has large yellow round spots and small black dots on a green background, so that it mimics the appearance of an egg clutch. It vent is transparent; the heart is visible and red, but the digestive tract, pericardium, and liver are wrapped in a white guanine coat. This frog has a broad head and a snout that appears truncated both in profile and from above. The eyes have gold irises and are not protuberant. The tympanum is not distinct. Digital discs are present and truncate. The first finger is longer than the second, with webbing present between the outer fingers. Toes are extensively webbed. Males have a white nuptial pad consisting of a few separate glands on the outer margin of the thumb base (Savage 2002; Leenders 2001). The tadpole of the Reticulated Glass Frog is small, measuring 12 mm in total length at the time of hatching. As described by Savage (2002), the tadpole of this species has brown blotches dorsally and on the tail, with the fins being clear and the underside bright red. It has an elongated body and tail, with the body being relatively depressed. The tail fin is small and the tail tip is rounded. In this species, the spiracle is posterior and midlateral. The oral disc is complete, with beaks and 2/3 rows of denticles present. Fine serrations are present on the lower beak. The A2 row of denticles is gapped above the mouth. A single row of papillae is present on the lateral and ventral margins of the oral disc.

an amazing frog! well shot too

This is simply beyond spectacular, what a spot Jonathan. FANTASTIC !

Thanks so much for the apreciation on this spotting .

Awesome capture Jonathan,congrats on the well deserved SOTD and thanks for sharing

Congratulations Jonathan Sequeira! These amazing eggs and glass frog are our Spot of the Day!