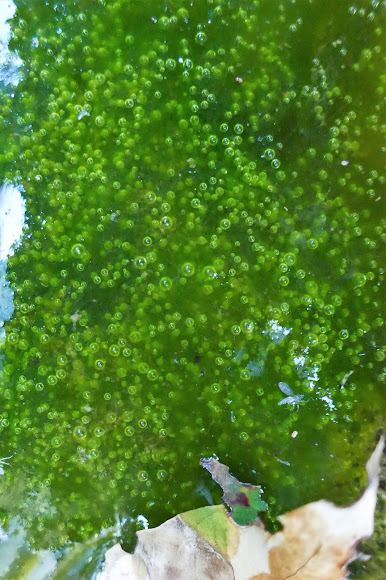 I spotted a few still pools containing an unknown species of freshwater green algae*. This was observed in a couple of places along what was otherwise a mostly-dry creek. I walked for over 500 metres along part of its length, but the last photo shows why I chose not to go any further. Despite the algae, water quality in these pools seemed quite clean, but without rain, it was only a matter of time before they would become stagnant. Other pools further downstream were less affected. Algal texture looked smooth and slimy, and there was no obvious structure that I could see other than it had a "density" which became noticeable at surface level, no doubt due to the countless bubbles of trapped gas/es being emitted from the algae which kept it buoyant. However, some small patches of dried algae on surrounding rocks suggest this is a filamentous species (top of 3rd photo). I remember thinking each cluster looked like "green clouds" floating freely in the water, not actually attached to anything. NB: Queensland Government - Department of Environment Sciences (DES) - Wildlife of D'Aguilar National Park - https://wetlandinfo.des.qld.gov.au/wetla... The information provided on this site is thorough, current, and applies to the local area where this spotting was made. It names 11 genus/species of green algae and 8 of blue-green algae (plus others). From this point on, no assumptions - get your microscope! All algae documented appear to be native Australian species, with some endemic to Queensland. There are also dozens more species of native protists in the Brisbane River drainage sub-basin, but not all of those would be freshwater species. Many would be marine and others terrestrial. PS: Just to be thorough, the Chlorophyceae are one of the classes of green algae, distinguished mainly on the basis of ultrastructural morphology - https://en.wikipedia.org/wiki/Chlorophyc... This list of genera in Chlorophyceae is sub-divided by order and family - https://en.wikipedia.org/wiki/List_of_Ch... You can take your pick, although that shouldn't be necessary. The DES has already done much of the legwork, although to nominate a specific species without microscopic analysis would be nothing more than a guess.

Shallow pools in the now-mostly-dry freshwater creek that flows into Gold Creek Reservoir, which lies just to the west of Brisbane. Freshwater lake, and dense native bushland vegetation of eucalypt forests and subtropical rainforests. The area was still quite damp and cool from morning dew, and well-shaded for most of the day. Massive lantana growth also along this entire watercourse. Australia is still in the grip of a severe drought, so creeks and rivers are not being flushed.

* Should this be a freshwater blue-green algae: Despite their name, blue-green algae are actually types of bacteria known as Cyanobacteria. Some species have the potential to produce toxins. This cannot be determined by ‘naked eye’ inspection; only a laboratory analysis can verify the potential for toxicity. I've included this because blue-green algae has been present in these lakes within the national park. https://www.qld.gov.au/environment/water... Not all algae is bad though as they are essential components of marine and freshwater habitats in and around Australia. The play a critical role in nutrient cycling, as food and shelter for invertebrates and fish, and some have considerable potential as biological indicators of the health of aquatic habitats. At least 12 000 marine, freshwater and terrestrial species are thought to occur in Australia, but many are yet to be described or fully documented - Australian Government - Department of the Environment and Energy (DEE)