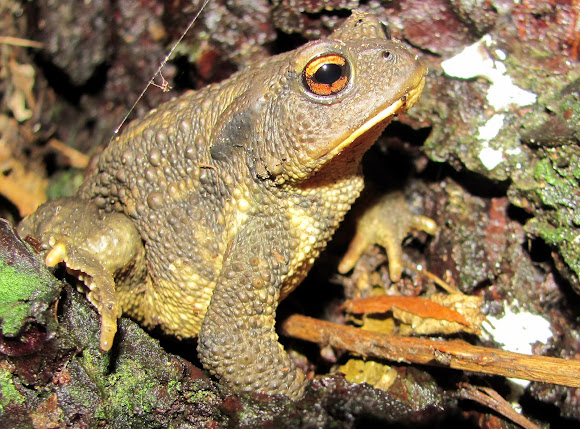 The common toad can reach about 15 cm (6 in) in length. Females are normally stouter than males and southern specimens tend to be larger than northern ones. The head is broad with a wide mouth below the terminal snout which has two small nostrils. There are no teeth. The bulbous, protruding eyes have yellow or copper coloured irises and horizontal slit-shaped pupils. Just behind the eyes are two bulging regions, the paratoid glands, which are positioned obliquely. They contain a noxious substance, bufotoxin, which is used to deter potential predators. The head joins the body without a noticeable neck and there is no external vocal sac. The body is broad and squat and positioned close to the ground. The fore limbs are short with the toes of the fore feet turning inwards. At breeding time, the male develops nuptial pads on the first three fingers. He uses these to grasp the female when mating. The hind legs are short relative to other frog's legs and the hind feet have long, unwebbed toes. There is no tail. The skin is dry and covered with small wart-like lumps. The colour is a fairly uniform shade of brown, olive-brown or greyish-brown, sometimes partly blotched or banded with a darker shade.

After the common frog (Rana temporaria), the edible frog (Pelophylax esculentus) and the smooth newt (Lissotriton vulgaris), the common toad is the fourth commonest amphibian in Europe. It is found throughout the continent with the exception of Iceland, the cold northern parts of Scandinavia, Ireland and a number of Mediterranean islands. These include Malta, Crete, Corsica, Sardinia and the Balearic Islands. Its easterly range extends to Irkutsk in Siberia and its southerly range includes parts of northwestern Africa in the northern mountain ranges of Morocco, Algeria and Tunisia. A closely related variant lives in eastern Asia including Japan