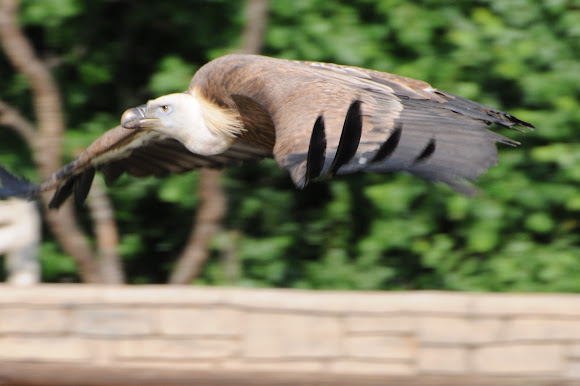 The Griffon Vulture is 93–110 cm long with a 2.3–2.8 m wingspan. In the nominate race the males weigh 6.2 to 10.5 kg and females typically weigh 6.5 to 11.3 kg. Hatched naked, it is a typical Old World vulture in appearance, with a very white head, very broad wings and short tail feathers. It has a white neck ruff and yellow bill. The buff body and wing coverts contrast with the dark flight feathers. Like other vultures, it is a scavenger, feeding mostly from carcasses of dead animals which it finds by soaring over open areas, often moving in flocks. It grunts and hisses at roosts or when feeding on carrion. The maximum lifespan recorded for the Griffon Vulture is 41.4 years, for a specimen in captivity. It breeds on crags in mountains in southern Europe, north Africa, and Asia, laying one egg. Griffon Vultures may form loose colonies. The population is mostly resident

This one was photographed in Madrid Zoo

This is the normal way to see a griffon vulture, which nowadays is not an uncommon sight. Although In Spain nowadays there are tens of thousands of birds, it was at the brink of extinction around 1980 with just a few thousand individuals. The Pyrenees population has apparently been affected by an EC ruling that due to danger of BSE transmission, no carcasses must be left on the fields for the time being. This has critically lowered food availability, and consequently, carrying capacity. Although the Griffon Vulture does not normally attack larger living prey, there are reports of Spanish Griffon Vultures killing weak, young or unhealthy living animals as they do not find enough carrion to eat. spanish name: buitre leonado

Added to Birds of Iberia mission

Thank you Atul, it was just good lucky one in tens of bad ones

you have captured the bird very well Arlanda ,complements !!

It is one of my favourite birds, AshishNimkar, keep watching it because just contemplating the way they fly tells you they are something very special.

At this I will keep watching this amazing bird... what I did last month... They are really stunning... Welcome Arlanda... Nice work.