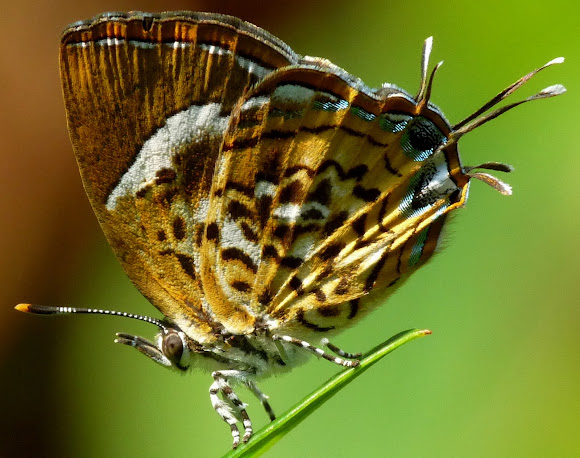 The Monkey Puzzle, Rathinda amor is a small lycaenid or blue butterfly found in south Asia. It is common and present in all the Western Ghat districts of Kerala, Karnataka, Tamil Nadu and Goa. Sexes alike. Wingspan - 26 to 28 mm. Upperside - The butterfly is dark brown. It has a white-spot end cell. It has narrow white spots on 2 and 3 which form a short band on the forewing. On the UPH it has two black tornal spots and narrow dark reddish spot above them. Underside - The butterfly is white to dark yellowish brown. Forewing has irregular dark basal markings with a curved white discal line. The apical two-fifths are a rich dark brown colour. The hindwing has a silvery margin with many irregular black lines and spots within. It has three tails, being 2 mm, 6 mm and 2.5 mm in length.

This butterfly is found in jungle areas of moderate to heavy rainfall - both, in heavy forest and scrub. The butterfly occurs below 900 meters or so. It keeps to undergrowth and can be seen along forest paths and in clearings.

The butterfly has a weak flight, it stays low and does not fly for long without alighting. Its method of alighting is interesting - as soon as it lands, it turns around and waggles its tail filaments, it also sidesteps for a while - all this is apparently to confuse a predator as to which side is the head. This is a likely reason that the first naturalists may have named the species the Monkey Puzzle.

Welcome to Project Noah kadavoor! I've been using your flickr collection as a reference for Indian butterflies! Nice to see you here.

Great series, especially the fourth one with other insects

Welcome on Noah! Now I can see your face! I certainly know your wonderful pictures from flickr ;-)... A name to remember!!
Fantastic little beauty!!

Amzing shots and detailed information. Thank you for sharing.