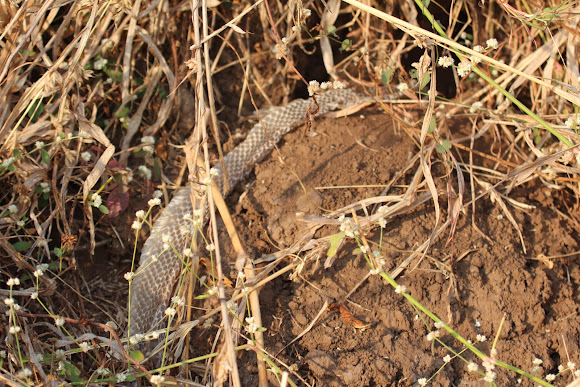 Saw this one in the morning today. Actually a big Raptor had landed nearby and we went to see what it had hunted. On seeing around we found this snake skin. As per wiki: Molting serves a number of functions. Firstly, the old and worn skin is replaced; secondly, it helps get rid of parasites such as mites and ticks. Renewal of the skin by moulting is supposed to allow growth in some animals such as insects; however, this has been disputed in the case of snakes. Molting occurs periodically throughout a snake's life. Before a molt, the snake stops eating and often hides or moves to a safe place. Just before shedding, the skin becomes dull and dry looking and the eyes become cloudy or blue-colored. The inner surface of the old skin liquefies. This causes the old skin to separate from the new skin beneath it. After a few days, the eyes clear and the snake "crawls" out of its old skin. The old skin breaks near the mouth and the snake wriggles out, aided by rubbing against rough surfaces. In many cases, the cast skin peels backward over the body from head to tail in one piece, like pulling a sock off inside-out. A new, larger, brighter layer of skin has formed underneath. An older snake may shed its skin only once or twice a year. But a younger snake, still growing, may shed up to four times a year. The discarded skin gives a perfect imprint of the scale pattern, and it is usually possible to identify the snake if the discarded skin is reasonably intact. This periodic renewal has led to the snake being a symbol of healing and medicine, as pictured in the Rod of Asclepius which is an ancient symbol associated with astrology, the Greek god Asclepius, and with medicine and healing..