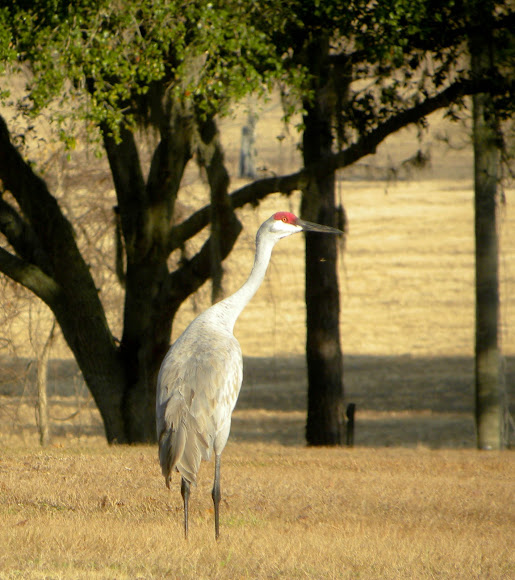 The Sandhill Crane is a tall gray bird of open grasslands, meadows, and wetlands. It congregates in huge numbers in migration.Florida's Sandhill cranes are a threatened species that are found in inland shallow freshwater marshes, prairies, pastures and farmlands. Sandhill cranes are usually seen in small family groups or pairs. However, during the winter, Florida's sandhill crane population increases as cranes from northern states spend the winter in Florida The Sandhill Crane does not breed until it is two to seven years old. It can live up to the age of 20. Mated pairs stay together year round, and migrate south as a group with their offspring.Their diet includes Mostly grains and seeds, some insects.This pair of birds live here in Florida year round.Loss and degradation of rivers and wetland ecosystems are the most important threats to Sandhill Crane populations. For the migratory populations, this is of greatest concern in staging and wintering areas. Spring staging areas along the Platte River in Nebraska are of special concern because of their importance to the migratory subspecies and the development pressures facing this region. Approximately 80% of all Sandhill Cranes utilize a 75-mile stretch of the Platte River in spring migration. Elsewhere, small breeding populations can face disproportionate mortality on fall staging areas due to over-hunting. Residential and commercial development pressures facing lands occupied by birds belonging to non-migratory subspecies in Mississippi, Florida, and Cuba also pose significant threats.

Yes, I like your Crane photos. The birds of your region are very interesting, beautiful

All cranes are really awesome.

Thank You! I see these birds quite often in Florida, they have 2 or three babies a year.They have a very distinct call, while flying, its awesome.

Thank you! Emma when I see wildlife while driving I will stop and take photos. I saw this pair in a pond. They then became scared and so I had to hide while taking their photo, usually, I hide behind trees. It sounds kooky, but it works.

Lucky you. It's the time of year to see them. Handsome looking birds.

Do you have to travel far to see these birds?

Thank You Emma! For your kind comments!

Thanks for sharing these videos!!