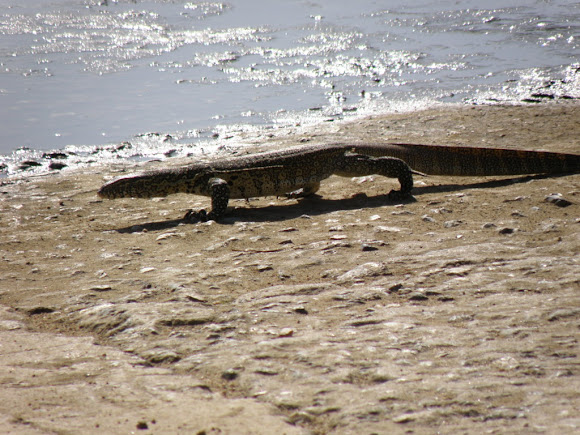 Monitor lizards are usually large reptiles, although some can be as small as 20 centimetres (7.9 in) in length. They have long necks, powerful tails and claws, and well-developed limbs. Most species are terrestrial, but arboreal and semiaquatic monitors are also known. Almost all monitor lizards are carnivorous, although Varanus bitatawa, Varanus mabitang and Varanus olivaceus are also known to eat fruit.[1][2] They are oviparous, laying from seven to 37 eggs, which they often cover with soil or protect in a hollow tree stump.[3]

The various species of Varanus cover a vast area, occurring through Africa, the Asian subcontinent from India and Sri Lanka to China, down Southeast Asia to Indonesia, the Philippines, New Guinea, Australia and islands of the Indian Ocean and South China Sea. There is also a large concentration of monitor lizards in Tioman Island in the Malaysian state of Pahang.

Monitor lizards differ greatly from other lizards in several ways, possessing a relatively high metabolic rate for reptiles, and several sensory adaptations that benefit the hunting of live prey. Recent research indicates the varanid lizards may have some venom.[4] This discovery of venom in monitor lizards, as well as in agamid lizards, led to the Toxicofera hypothesis: that all venomous lizards and snakes share a common venomous ancestor.[5] Varanid lizards are very intelligent, and some species can even count.[8] Careful studies feeding V. albigularis at the San Diego Zoo varying numbers of snails showed that they can distinguish numbers up to six.[8][9] n Tamil and Malayalam, monitor lizards are known as udumbu, ghorpad घोरपड in Marathi, uda in Kannada, in Sinhalese as kabaragoya, and in Telugu as Udumu. Due to confusion with the large New World lizards of the family Iguanidae, the lizards became known as "goannas" in Australia. Similarly, in South Africa they are referred to as leguaan, from the Dutch for iguana. The generic name inspired the name of the Japanese movie monster Varan.

How to join it?

Just about Tioman, trying to know every animal/plant on the island

What is this mission about?

Would you like to join the mission "Tioman, Malaysia"?