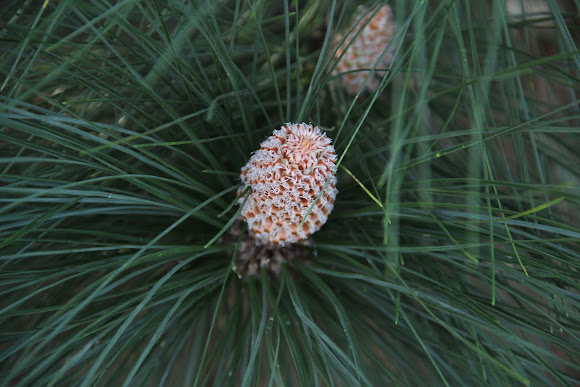 Pine tree with long needles about 23cm long in groups of three, small cones (at least when I spotted it) and bent trunk.

Along trail at Lake Dixon. "native and endemic to the outer Canary Islands (Gran Canaria, Tenerife, Hierro and La Palma) in the Atlantic Ocean"

" It is a subtropical pine and does not tolerate low temperatures or hard frost, surviving temperatures down to about −6 to −10 °C. Within its natural area, it grows under extremely variable rainfall regimes, from less than 300 mm to several thousands, mostly due to differences in mist-capturing by the foliage. Under warm conditions, this is one of the most drought-tolerant pines, living even with less than 200 mm per year."

Native to Canary Islands, but commonly cultivated in southern California.

Hello Meik, it's certainly similar! I researched P. strobus and it's not found this far south in California. I'll look in to similar species based on your suggestion though! Thank you.

Cindy, this might be Pinus strobus (Eastern white pine).