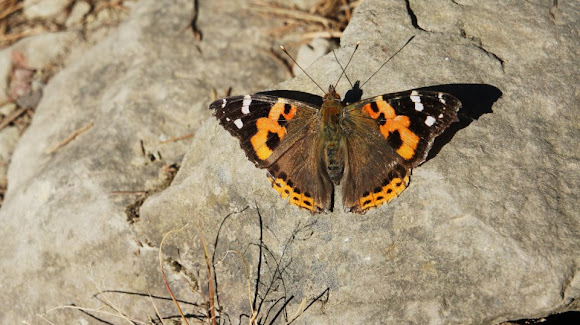 Identification: Wingspan: 55-65mm. Upperside: Forewing brown at the base, black at the apex, with subapical white spots and a discal red band. Hindwing dark brown, unmarked, except for the black-spotted red margin. Wings have a golden and bronze sheen, especially near the bases. Underside: dark brown with fine grey, greenish, brown and black markings, which aid in camouflage. Subspecies pholoë differs from indica in having the lower two black spots on red discal band of the upperside forewing joined to each other. These spots are usually detached in subspecies indica.

Status, Habitat and Habits: A common species from hilly regions of the country. It usually flies from approx. 500m to 3,500m asl but it is much commoner at mid-elevations (1,200m to 2,500m). It flies throughout the year in the Western Ghats, the Himalaya and NE India at mid- and lower elevations, although it is commoner before and after the rainy season. In these areas it produces multiple broods every year. It flies only from April-May to early October at higher elevations, where it finishes two broods and spends the rest of the year hibernating. In the Western Ghats it is common in the montane shola-grassland mosaics from Karnataka to Kerala, occasionally descending to lower evergreen forests. In the Himalaya and NE India, it frequents open forests, flower-clad meadows, village outskirts and gardens. It is especially common along forest paths and other forest openings, where stinging nettles, its larval host plants, grow in clumps. It is a common sight at popular hill stations in the Nilgiri and Palni Hills in the Western Ghats, and in Uttaranchal, Himachal Pradesh, Sikkim, West Bengal and Arunachal Pradesh. Males are more frequently seen than females. Both sexes are attracted to rotting fruits and animal dung, plant sap and flowers. Males often mud-puddle and are attracted to sweaty limbs of trekkers, which they vigorously defend from other butterflies. Males also hill-top and patrol ridges and forest paths, where they chase passing butterflies. They are very wary when not feeding, they keep their distance, so it is sometimes difficult to obtain good close-up pictures. Females tend to be much more tolerant of human observers near their host plants. When disturbed, both sexes sometimes perch on tree-trunks with the wings closed and head pointing to the ground. Owing to their cryptic undersides, they are extremely difficult to spot in this position. They bask low on rocks, paths and vegetation, with their wings spread flat. They are very strong on the wings, they fly with rapid wing beats, which, at times, can be audible.

There are 11 different species of Red Admiral in the genus Vanessa, plus 10 species of Painted Lady, the latter being ( incorrectly ) placed in the genus Cynthia by some authors. The Red Admirals ( the name is believed to be a corruption of "Red Admirable" ) all share the same basic pattern, having a blackish-brown ground colour with a bright orange-red diagonal band on the forewings, a series of white apical spots, and a red submarginal band on the hindwings. The undersides of all species are cryptically patterned in a manner which affords them excellent camouflage when at rest on tree trunks or on the ground.

Do you think this is an Indian Red Admiral. http://www.projectnoah.org/spottings/131... The photo is not clear but I spotted it in Manali and it seems like a Red Admiral to me.

When I first saw this spotting I thought it was the Painted Lady. I didn't know that the Red Admiral was a close relative . Thank you for that info bayucca.
And also thank you SanjaySaklani you have provided all the relevant information about this species. Its really great.

It is in US also called Asian Admiral and is a relative of the famous migrant butterfly Vanessa cardui, Painted Lady, which is probably the most spread butterfly in the world.