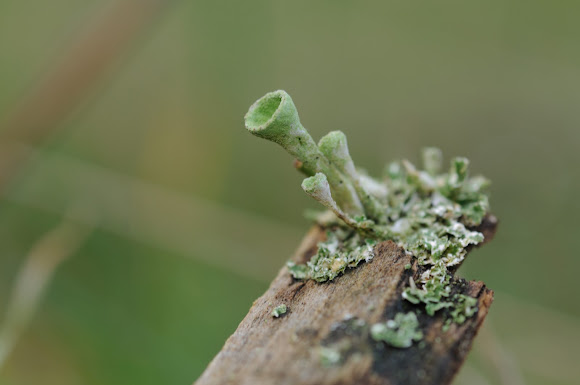 Podetia grey-green, with cups abruptly expanded from the long, cylindrical stems, with finely granular soredia on the outer surface and interior of the cup, minute brown pycnidia often on the cup margins; apothecia brown on margins of rather distorted cups, uncommon.

On soil and rotting wood, widespread and common.

Thanks AlexKonig, I think you are completely right.
Although Project Noah is not perfect I am learning a lot, specially from discussions like this. I also agree with you and we should look for alternate
solutions when we need it. In that way it will always been alive.

I was a little late to get on the boat, but I just now realized that a mission HAS indeed been created for slime molds. Firstly I'd like to say "Congratulations!" and that I hope this mission is successful. :)

I know what you mean Clive, that having completely unlike spottings next to each other comingle in the Others category is not such a great aspect in a website trying to spread awareness of what makes them different/unique, but like you also mentioned, for the new users it's the best they can come up with. By experienced users, I meant people familiar to the Project, but not neccessarily fungi-knowledgeable, much less familiar with slime molds, lichens, crusts, etc. Should of made that more clear, my mistake. To both of these groups, Other would be the next best thing, and as we've observed through the discussion, some people classify things differently. Now let's imagine that the new categories are created. Now we could have many spottings temporarily in the Others section which will be recommended the the proper category by this great community of mycologists or fungi-lovers. Then there's the issue of having two identical spottings in differing categories, i.e. the lichen. Correct me if I'm wrong, but I've heard debate that they can fit in both fungi and algae groups. Now there would be debates much like this to argue exactly where something should go. To keep with the simple spirit of Project Noah, it would be easier to come up with an alternate solution other than new categories. It seems to me that this site is dual-purpose, to firstly promote awareness of the beauty of nature and secondly help users gain a proper understanding of it. This can and has been achieved already, even in this discussion, without the need to add specific categories. For the devoted mycologist, a website focusing solely on slime molds and related subjects would suffice, but I've yet to hear about one of those up and running...

Well no matter what happens, I am hopeful for a solution that benefits us all, and time will only tell what the future has in store for us. :)

you may now take a breath :)

@Lars- what sprecicsly "IS/belongs" to the "other" category.(already cleared- clive has explained it)
@Arlanda- i also think it is !! could not find references which say otherwise
@Edwardnathanreulbachjr. - I will also do so in future, because my books say the same
@lauramaria-you're right, but i dont think, the taxanomy will get better somedays, it is just good, as long as nobody find out something new about it!!
@clive- total agreement, while i can still live with those sloppy categories. I'm dissapointed to read you will leave.(have just now read the last comments, know it already) But unfourtanetly i think i still canot convince you to show us some of your newest "slime mold spottings" (already seen-nice one-have already joined both new "mycological" missions. :):)
---- sorry, i first wanted to comment to many, but it's too many, i should be expirienced live,now it is an old/cold discussion!!


-------the dinos were already hatching out of eggs before the chicken evolved !! :)
And i do not really like to argue, but sometimes, also i want to say my thoughts.@!!!ascomycota,badsidiomycota,yeasts,oomycetes,Zygomycota,Chytridiomycota,Glomeromycota,lichen,mold and slime moulds... belongs all to mycology (science which studies fungi/fungi-like). Yes lichen is a stand-alone branch in the system: FUNGI.----1#--->The mission is called "Mushroom mapping" {Mushroom" describes a variety of gilled fungi, with or without stems, and the term is used even more generally, to describe both the fleshy fruiting bodies of some Ascomycota and the woody or leathery fruiting bodies of some Basidiomycota, depending upon the context of the word ( http://en.wikipedia.org/wiki/Mushroom )} therefore thats already wrong labeled!! Fungi like the "coral spot/nectria cinnabarina", would not count then. 2#--->At the category-pictogram popped "fungi" up. LICHEN are fungi-symbionts {Lichens are formed by a symbiotic relationship between algae or cyanobacteria (referred to in lichen terminology as "photobionts") and fungi in which individual photobiont cells are embedded in a tissue formed by the fungus---/----Lichens are named based on the fungal component, which plays the primary role in determining the lichen's form. The fungus typically comprises the majority of a lichen's bulk, though in filamentous and gelatinous lichens this is not always the case. The lichen fungus is typically a member of the Ascomycota ( http://en.wikipedia.org/wiki/Fungus#Taxo... / http://en.wikipedia.org/wiki/Lichens#Tax... )}.-hence arlanda ! The category is RIGHT!!. 3#---> the mission "mushroom mapping" is part linked to "The New York MYCOLOGICAL Society" ( http://strataspore.com/ ). They are probably intrested in Mycology:"Mycology is the study of the fungi. Among the mushrooms are the divisions of the Ascomycota, Basidiomycota, Zygomycota, Chytridiomycota, Glomeromycota, but also unsystematic groups such as yeasts and molds. Traditionally, mycologists often deal with slime molds (Myxomycota) and Oomycota, which are now count no longer among the fungi but to the protists. Even the science of lichens - the Lichenology - belongs in the broadest sense to mycology, because the dominant part of this symbiosis is taken up by the fungi. In mycology, there is considerable overlap with the microbiology, because a lot of mushrooms are in parts of their stages of development, also microorganisms.The term mycology is derived from the Greek word mykes for fungus. According to a Greek legend, the Greek hero Perseus, founded the city of Mycenae in the place where he refreshed himself with water which had collected in the hat of a mushroom ( http://de.wikipedia.org/wiki/Mykologie )" . { Fungal Biology is a scientific journal that publishes peer-reviewed papers on all aspects of basic and applied research of the fungi, including lichens, yeasts, oomycetes, and slime moulds ( http://en.wikipedia.org/wiki/Mycological... ) }. I think: The mission mushroom mapping gives us {citizen scientists} the opporunity to share the biodiversity around us, and transmitt those spottings to real scientist who get through this data at least "distribution-maps" {what other data will they get more,out of amateur-shnapshots ?}.Because we collect data, i think we should give more about the details of the specimen, than at the angle of the shot. But, that shouldn't bother me. "Project noah" is for me , for the mission "mushroom mapping"(should be called "mycological" mapping"), which is for my mycology-hobby to share my fungi/slime mold/lichen-spott-data to other mycologist for research. That's all and enough !!

congratulation for the "spotting of the day" with this nice spotting. Keep it going, i like your spottings. Ohh my god, what have i missed, the last days. !! :) Also Congratulation arlanda , for THIS discusson. :)) i totally understand you ! :) --->>.....

Congratulation Arlanda on your the spotting of the day! It is in both ways a beautiful picture, as spotting and aspecilaly as photo.

Thanks Sachin Zaveri and Ivan Rodriguez

Lichen is a symbiotic life form. I do feel it should be in the fungi category than the "other" category. The fruiting body is so similar to ascomycota. I think putting lichen in a category with echinoderms and other non-categorical inverts is just wrong.

Congratulations, that surely is some unique lichen. :)
To Clive: placing the spotting, regardless of what it is, under Other is not at all a bad thing. It's not degrading, difficult, or making the subject unworthy of attention -- all it is the most applicable category for it to be placed under. Heck, I'm sure some people would like a Cats category, and a Dolphins category, and a Lion, Jellyfish, and Grass category as well, but that would destroy the simpleness of this website to newcomers and seasoned naturalists alike. Furthermore, if someone is so interested in learning more about slime molds, how hard is it to go to Organisms and type it in the search? Or if not that, create a mission to spread awareness. You have already spent time and effort on this website and gained an audience (scroll up and notice how many times people try to talk you out of your decision), and just so you can leave? What do you gain from that? You could of influenced a curious mind into the world of slime molds and related subjects, thereby spreading awareness and proper understanding of them, but in leaving the site this is not accomplished. You're a very inspiring person, Clive. Your knowledge, camera skills, and ability to find the most beautiful of fungi and share it even within this small community is proof that doing what you love is noticed, and that's something I would someday also like to achieve. In all due respect, it's completely your call -- leave and just the memory of you will survive, stay and we can all grow together.

Thanks Peter,
it has been a big surprise. didnt expect it
I have been the whole day in a thesis disertation as part of the Tribunal.
It has been a strance day
Thanks a lot