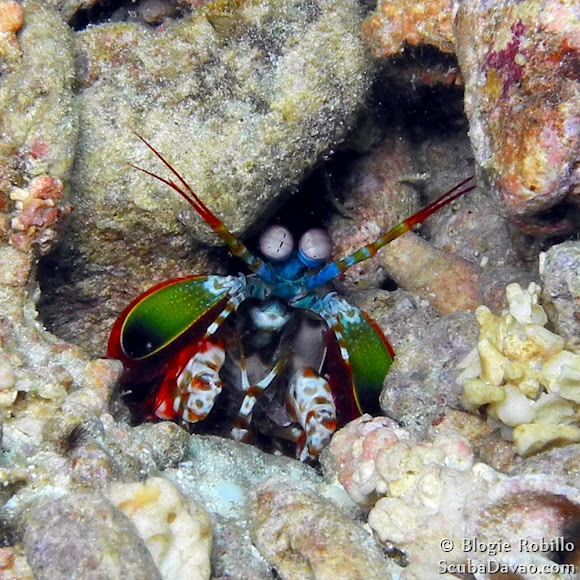 Also known as Smashing Mantis Shrimp, Odontodactylid Reef Mantis Shrimp, Green Mantis Shrimp, Clown Mantis Shrimp, Mantis Clown, Rainbow Mantis Shrimp, Harlequin Mantis Shrimp and Painted Mantis Shrimp. Males brighter than females, juveniles yellow. They feed on fish and invertebrates. Despite its name, mantis shrimp do not belong to the shrimp family. While this crustacean may appear shy, it is in fact quite dangerous when provoked. Its front appendages are extremely fast and tough, and are used for breaking mollusk and crab shells. Divers have reported cracked polycarbonate camera housings caused by mantis shrimp defensive attacks.

Found close to reefs in sand and rubble areas with several burrows to hide in. Widespread in the Indo-Pacific region.

Mantis shrimp are commonly seen peeking out of their holes in sandy or rubble areas. I spotted this one near the shore at a depth of less than 10m.

Thanks, Corey! They're a fascinating creature, but dangerous too.

hes a cutie! I love the video footage

You're very welcome, patty. I'm glad that you found this interesting. :)

Beautiful pictures and video; they really complement each other =). And the video allowed us to have a quick glance of the beautiful, colorful, lively biodiversity in those coral reefs. Thank you =)

On today's dive, I goofed around a bit with one of these critters. It was in its hole and I was tickling it with my aluminum pointer. Suddenly I heard and felt the mantis shrimp attack my pointer -- there was a very clear and sharp ring and a vibration from the metal! I then remembered that it's one critter that's been known to break the glass of a camera housing! I now have a renewed respect for this magnificent crustacean.

Added a video to this spotting, but it's of another mantis shrimp.

what a fascinating creature!

I agree with you, Blogie, but must admit to having a small freshwater aquarium in my home.

@craigwilliams - Thanks very much!! More to come! ;)

@SarahHiteWhitt - Thanks for your greeting! But you know, I really wish people would stop taking wildlife away from their natural habitat. These creatures are indeed beautiful and a delight to see, but it's so much better to experience them in the sea. ;)

Do they sell these lil guys in pet stores? If so, makes me wonder how you would transport him home - I suppose in a styrofoam box...
Beautiful spotting & congrats on "Spotting of the Day"!! :)

Fantastic!!! - I've only ever seen pale colourless ones...

A tough nut dressed up as rainbow - who in their right mind would call them names?! Congratulations Blogie, well deserved; the truth is you've shown us so many spellbinding wonders from those waters, there's got to be many more SOTD to come!

and 75 other people favorited this spotting