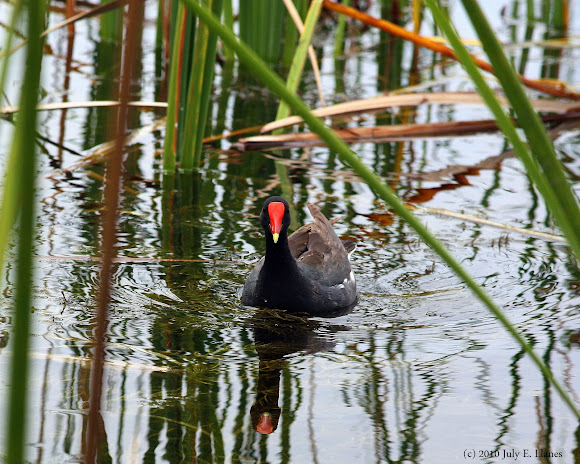 The Moorhen is a distinctive species, with dark plumage apart from the white undertail, yellow legs and a red facial shield. The young are browner and lack the red shield. It has a wide range of gargling calls and will emit loud hisses when threatened.[4] This is a common breeding bird in marsh environments and well-vegetated lakes. Populations in areas where the waters freeze, such as southern Canada, the northern USA and eastern Europe, will migrate to more temperate climes. This species will consume a wide variety of vegetable material and small aquatic creatures. They forage beside or in the water, sometimes upending in the water to feed. It is often secretive, but can become tame in some areas. Despite loss of habitat in parts of its range, the Common Moorhen remains plentiful and widespread. They fight over territories and also hop around Lily pads.