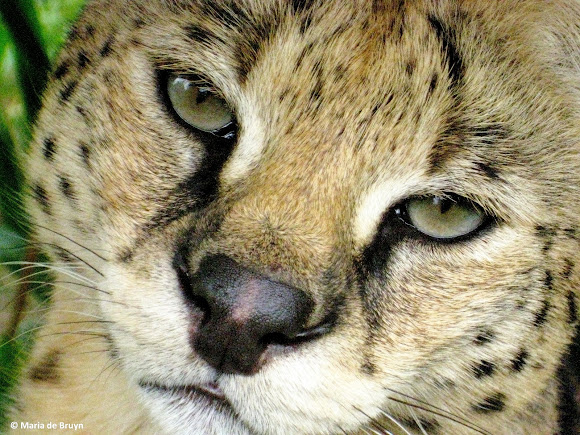 Servals have the longest legs relative to body size of any cats. This allows them to see over tall grass in the savanna. They have large ears and a very sensitive sense of hearing. They can jump up to 12 feet horizontally and up to 10 feet vertically into the air to catch birds but more often eat rodents, snakes, reptiles, insects and fish. They sometimes play with their prey before eating it, usually hunting at night. They are solitary animals in the wild. The young are initially blind, opening their eyes at 9-13 days of age. At around six months, they acquire their permanent canine teeth and begin to hunt. They leave their mother at about 12 months of age. Their populations have decreased due to hunting for their pelts and loss of habitat.

It is widely distributed south of the Sahara, remaining in Tunisia because of a reintroduction program.

These photos were taken at a sanctuary for exotic carnivores, which rescues them from abusive situations or from people who had them as pets until they realized that these wild animals cannot be domesticated. (Those people must agree never to have them as pets again.) A few were born at the sanctuary until a decision was made about 10 years ago not to allow reproduction. It is a no-touch facility, not permitting any human contact unless the animal must be anesthetized for examination or treatment by a veterinarian. The sanctuary opposes keeping wild cats as pets or for entertainment purposes, as well as the trade in wild animals.

Thanks, jessica10 and others who commented earlier. He was really quite a regal feline and I'm glad he had a good life at the sanctuary until his death.

They are such perfection cats

What a beautiful cat

Wow, I've never seen this one before. Nice one!

Really glad for the good life...sad he is gone

Thanks, Rick. This was indeed an awesome serval; unfortunately, he died some weeks ago but he had a good life at the sanctuary

Thanks, Jacob and Jolly! He really is a stunning cat!

Thank you, Cecilia, Gerardo and Mayra. I really love this cat (I sponsor his upkeep at the sanctuary.)

Thank you, Emma and Achmmad! They really are beautiful cats.

Nice information on the note and really nice pics!

@ S Frazier: yes, it is in North Carolina, unfortunately a state where some counties still allow people to breed them for the pet trade; they also cross them with large domestic cats and have created what they call a new "breed", the savannah. The sanctuary opposes this. Thanks, Kat!

So the sanctuary is located in North Carolina?

Thanks, Dan! They are beautiful cats.

@James: we don't get to name them; the sanctuary does it. He has the name Todd.