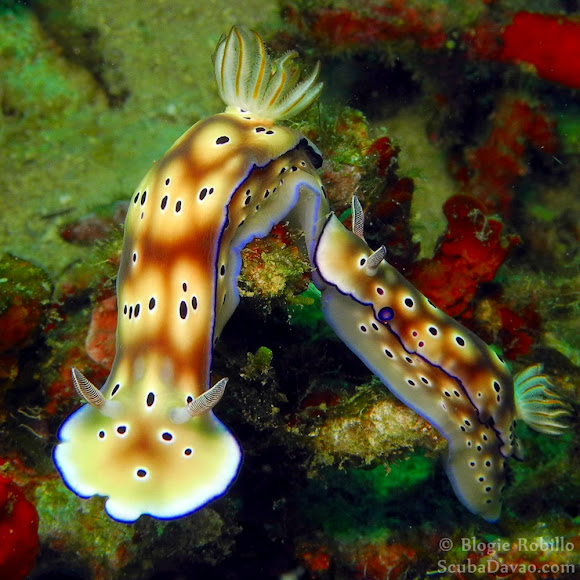 An attractively colorful nudibranch with irregular, white-ringed purple spots all over its light-brown body and white foot. The gills are typically translucent white or light brown with darker brown margins. The rhinophores are brown to dark brown and covered with white circular lines. The mantle is edged by a thin blue or purple line. Note: H. tryoni is similar in appearance to Goniobranchus kuniei and Chromodoris leopardus, but it lacks the wide purple mantle edge present in those species. This nudibranch used to be referred to as Risbecia tryoni.

These nudibranchs occur in the tropical Western Pacific, from Australia to the Philippines.

I spotted this pair at about 50 feet, treading on a rubble patch. One seemed to be leading the other -- no matter where the leader went, the other followed, and constantly in physical contact. (According to eol.org, this species has a "trailing behavior".) Dive site: San Juan Reef, Davao Gulf.

Thanks guys! I just wish I could take better videos soon...

Beautiful series and great video showing how they move through the water!