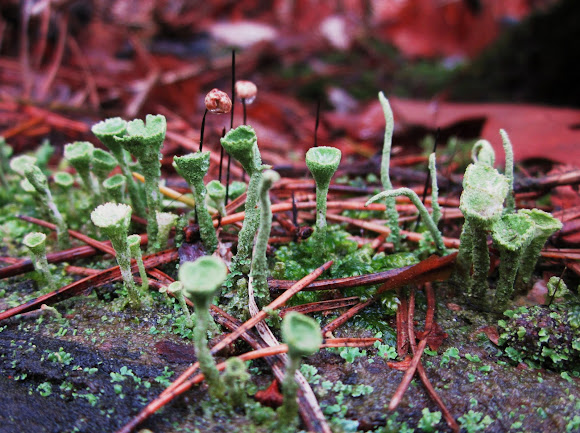 Cladonia fimbriata has relatively tall trumpet-shaped podium-like structures or podetia. The podetia rise like small tubes and abruptly open out trumpet-like, which is a distinguishing feature. The reproductive structure or apothecium resides at the top of the podetia. The podetia range from 1 cm to 2 cm in height and are usually coated in a fine dust of soredia. Sometimes the soredia form larger granules, but this is rare. The rims of the podetia are even, unless they are actively reproducing, in which case the apothecia make the rim lumpy or irregular. The thallus is a grey-green to green colour. Scales or squamules with a small indent (giving them a lobed appearance) cover the thallus, but not the podetia. The squamules may be sorediate or dusty. Spores are colourless, 1-celled and are packed 8 to an ascus. The photobiont is Trebouxia. ( http://www.lichens.ie/lichen-description... )

Podetia grey-green, with cups (scyphi) abruptly expanded from the long, cylindrical stems, with finely granular soredia on the outer surface and interior of the cup, minute brown pycnidia often on the cup margins; apothecia brown on margins of rather distorted cups, uncommon . On soil and rotting wood, widespread and common ( http://www.lichens.lastdragon.org/Cladon... ),

Cladonia (cup lichen) is a genus of moss-like lichens in the family Cladoniaceae. They are the primary food source for reindeer and caribou. Cladonia species are of economic importance to reindeer-herders, such as the Sami in Scandinavia or the Nenets in Russia. Antibiotic compounds are extracted from some species to create antibiotic cream. The light green species Cladonia stellaris is used in flower decorations. Although the phylogeny of the genus Cladonia is still under investigation, two main morphological groups are commonly differentiated by taxonomists: the Cladonia morpho-type and the Cladina morpho-type. The Cladonia morpho-type has many more species, and is generally described as a group of squamulose (grow from squamules), cup-bearing lichens. The Cladina morpho-types are often referred to as forage lichens, mat-forming lichens, or reindeer lichens (due to their importance as caribou winter forage). ( http://en.wikipedia.org/wiki/Cladonia ) ----- on my research, just now, i found some references which let me suspect 2 different species here on this spotting.!! 1# the cladonia fimbriata: thrumpet-like cups and the other sexual-part are the sticks, which are seen often together (i have some at previous spottings) 2# the specimen at picture 6 are different as the sticks mentioned above, the suspected other species is "branched". When i not mistake, is the other sexual-part of cladonia fimbriata, just one line/stick--> it doesn't splitt/branch ! But the specimen on the picture do. (i have just 1 more picture, not much different angle, i will just let it so, untill i get the opportunity to confirm my guess! [cladonia subulata]) {not sure, just a feeling!!}