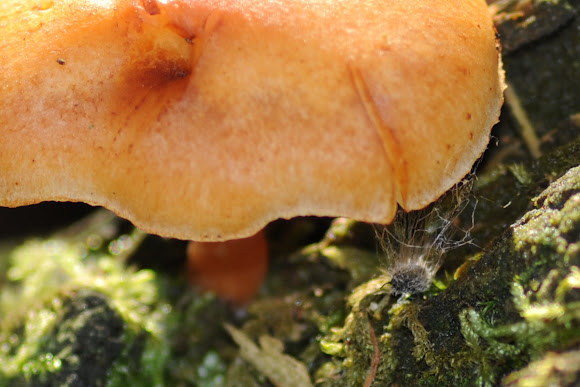 This small mushroom grows on conifers. The cap is 3–8 cm across, is convex, and is golden-yellow to brownish orange, darker at the center with a dry scaly surface which is often fibrillose and may have squamules. The cap margin is inrolled at first and curves outward as it matures, becoming almost plane and sometimes developing fibrillose cracks in age. The gills are crowded, yellow at first, turning rusty orange as the spores mature, with adnate attachments. The stipe is 5–10 cm long. It is light yellow, bruising rusty brown with white cottony base infiltrating the substrate. It is usually found in tufts or troops. The stipe has an evanescent veil which often leaves fragments on the upper part of the stipe or the margin of young caps.

notice the silked insect under the mushroom, first picture!