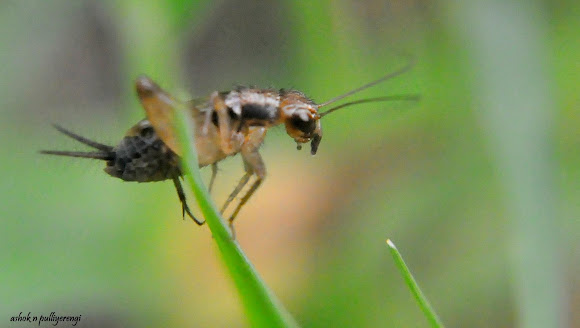 These are somewhat related to grasshoppers, and more closely related to katydids or bush crickets (family Tettigoniidae). There are about 900 species of crickets. The sound emitted by crickets is commonly referred to as chirping; the scientific name is stridulation. Only the male crickets chirp. The sound is emitted by the stridulatory organ, a large vein running along the bottom of each wing, covered with "teeth" (serration) much like a comb. The chirping sound is created by running the top of one wing along the teeth at the bottom of the other wing. As he does this, the cricket also holds the wings up and open, so that the wing membranes can act as acoustical sails. It is a popular myth that the cricket chirps by rubbing its legs together.