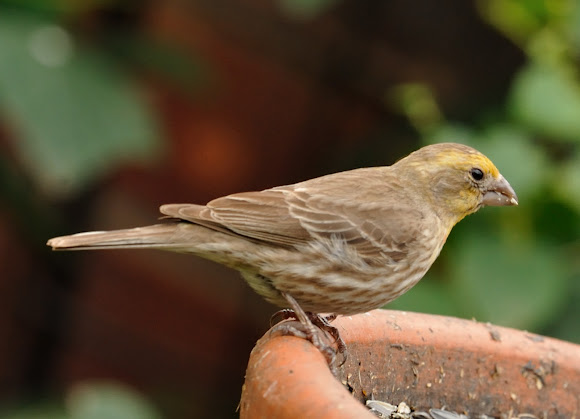 House Finch coloring varies widely, and research shows that most of the variation is caused by diet. All male House Finches have the same potiential for yellow, orange, or red coloration. Researchers who kept House Finches in captivity found the red plumage replaced by yellow unless a carotenoid pigment was mixed in with their food during molt. The pigment was mixed in for experimental purposes, to determine the cause of the color variation. Research verifies that the color variation often found in House Finches is caused by pigments in food, but this finding in no way suggests that it's necessary or even desireable to affect a bird's color by manipulating the food source. In the wild, three carotenoid pigments found in natural foods give House Finches their color. Beta-carotene produces yellow to orange colors, isocryptoxanthin produces orange colors, and echinenone produces red colors. Yellow House Finches are frequently seen in the southwest and Hawaii where natural foods are low in some of these carotenoids. In the east birds often feed on the high-carotenoid fruits of ornamental plants.