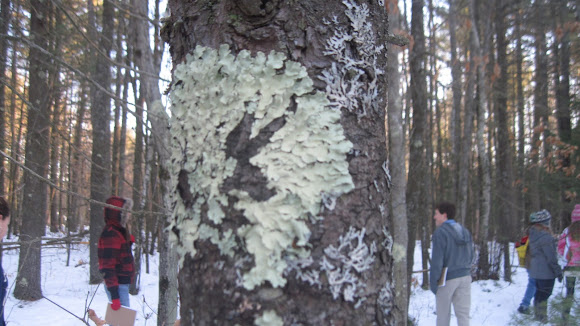 We discovered this lichen about 1.8 meters high on the living tree bark. It’s color was a pale yellowish-green. It was flaky but smooth. The thallus is very thin and didn’t stick off the tree, keeping it more of a smooth lichen. It was growing in groups along a tree (bunches.) My lichen is a crustose design. I would describe it as a flaky. I have a clue of what my lichen is, but not positive. It was measured to be about .5 mm wide. It was bunched up though into groups as you can see on the picture above. It could possibly be Sea-Storm Lichen, or known as Flavoparmelia caperata.

On January 18, 2012, 8:00 a.m., our class went outside in a search for lichen to submit as a project. When we went outside for the search, it was 4ºC out, about 8 mm of snow covered the ground and a little windy. The sky was very cloudy that day. The piece of lichen I found was taken from the temperate deciduous forest. I found a tree with lichen on it; the other trees around it in the forest of Waterboro, Maine, where the forest contain a lot of birch and oak, had the same sort of lichen on it. Found about 6-7 meters into the forest which was alongside a road where cars and buses pass multiple times a day. Alongside a walking trail in the woods. The forest itself isn’t very thick at all, it’s more open.

You have very good descriptive field notes and a very good picture.:)