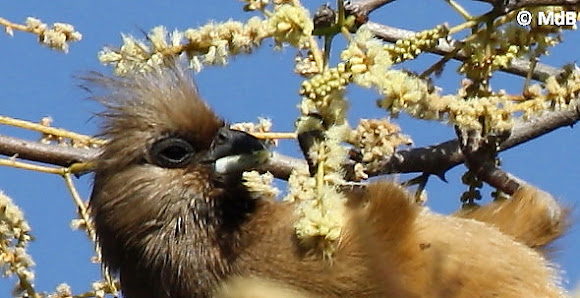 These are slender brown birds have a long thin tail, crest. They are the largest species of mousebird and the most common. The bill is two-toned with upper bill being black and the lower bill whitish. They eat berries, fruit, buds, leaves nectar, termites and ants and they can feed upside down in trees. They have strong claws and reversible outer toes. These social birds feed together, engage in mutual preening and accompany one another when they dust bathe on the ground and occasionally swallow pebbles to assist in grinding up vegetation as they digest it. They have varied vocalizations with distinct alarm calls, according to the kind of danger: a loud “shriek” for terrestrial predators, an explosive “pit” for aerial predators. These calls are uttered in rapid series, with crest alternately raised or flattened. They make contact calls - “chew-chew” - when the birds are perched in treetops or flying together, and also warble and have courting calls. They breed at any time of the year. The large nest is an untidy cup made of vegetable and animal material (sometimes including cloth and paper) and is constructed by both the male and female, which form a monogamous pair. The female lays 1-7 eggs and nestlings are fed by both parents as well as helpers, often juveniles from previous clutches. The incubation period is 10-14 days and the offspring can fly about 17-18 days. After a little over a month, the nestlings will begin foraging for themselves.

Mousebirds are found only in sub-Saharan Africa and is the only bird order confined entirely to that continent. They live in bands of about 20 birds in most habitats, except the rainforests and more arid areas, but they prefer open bushveld, savanna and woodlands. The speckled mousebird is also often seen in urban gardens and orchards.

Belated thanks, JinkyDee and Sachin!

Love these! I had a devil of a time getting close when I was in Kenya