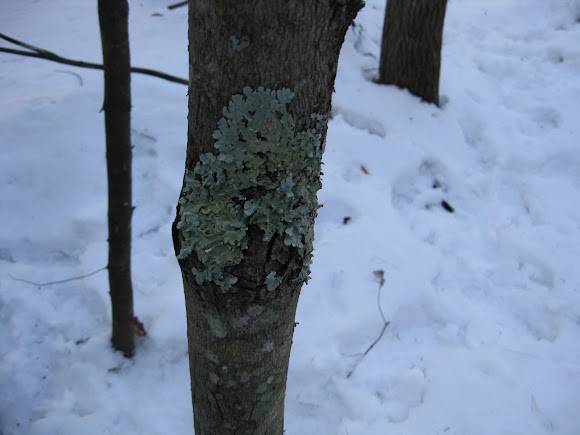 The lichen was found as my group and I were entering the trail that is on our school grounds. Kingdom: Fungi Division: Ascomycota Class: Lecanoromycetes Order: Lecanorales Family: Parmeliaceae Genus: Flavoparmelia Species: F. caperata

The habitat of the Fructicose lichen is that it grew or is growing on a tree. It has a greenish color with a slight amount of gray. There was snow on the ground. A lot of the lichen was on the trees or on fallen branches.

My field notes are that we went outside to look for lichen. The day was January 18th, 2012. We were not looking for any particular type of lichen though. There was a marvelous selection that was right on the school grounds! There were smaller pieces and there were rather big pieces as well. Some of them were green and some were almost a brownish color. We took many pictures of them also. A lot of the lichen looked like they had obtained that area for a while. It was not raining and there was a crusty layer of atmospheric water vapors on the ground. Most of the lichen were on a woody perennial plants. Some of them were on ginormous evergreen coniferous trees that has clusters of long, needle-shaped leaves. Temperate deciduous forest biome is the biome of the lichen in our area. One of the lichen that I identified is the Fructicose... -they have branches with it’s fungal layer outside,its algal layer was within. -no rhizines -vertical growth pattern -odd shaped structures such as globets; threads -Fruiticose lichens are either growing on the ground, or on a shrub or a tree. With a metric ruler, the Fruiticose lichen that we found is 3 cm by 2 cm thick.