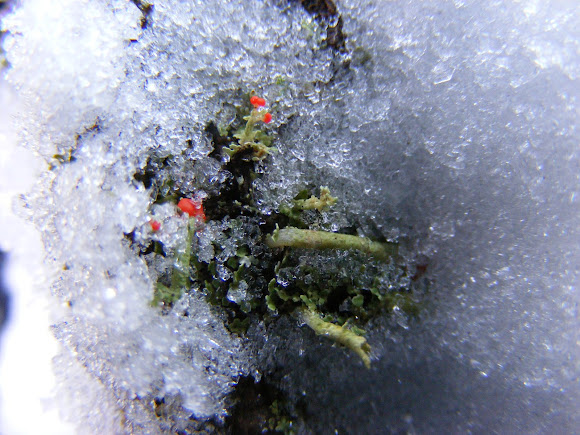 On January 19, 2012 our science class went outside to look for animal tracks in the snow as well as lichen growing on our campus. The temperature outside was 3º celsius with winds blowing at 32.1 kph and gusting at times to 41.8 kph. It was sunny with a few clouds in the sky. The snow had a crust from rain the evening before. The area we were investigating was the island in the bus parking lot. While we were out there we were unable to locate any animal tracks. We did locate several varieties of Lichen growing in this area. On a piece of wood we found a dark green lichen with lighter green sprouts growing. The tips of the sprouts were red in color. These sprouts appeared to be about .5cm tall and growing in small clumps of 3 or 4 sprouts. Based on research I believe the lichen i found is Cladonia cf Cristatella also known by the common name of British Soldiers. Kingdom: Fungi Phylum: Mycophycophyta Class: Ascomyphota Order: Lecanorales Family: Cladoniaceae Genus: Cladonia Species: Micalenta

Nice job! I like the pics with the ice! Looks really cool. The only thing is you could use a couple of more descriptive words. Etc. crustose or fruticose. Also a question: id the lichen close to the ground (on a stump or something like that) or is it higher up like on the trunk of a tree? Other that that really nice job.

Adding the scale is very useful to other people looking at your photo. It is also very scientific; well done