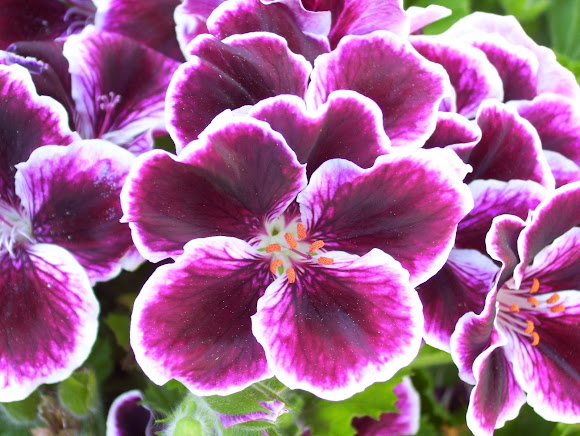 Pelargonium /ˌpɛlɑrˈɡoʊniəm/[1] is a genus of flowering plants which includes about 200 species of perennials, succulents, and shrubs, commonly known as scented geraniums or storksbills. Confusingly, Geranium is the correct botanical name of a separate genus of related plants often called Cranesbills. Both Geranium and Pelargonium are genera in the Family Geraniaceae. Linnaeus originally included all the species in one genus, Geranium, but they were later separated into two genera by Charles L’Héritier in 1789. Gardeners sometimes refer to the members of Genus Pelargonium as "pelargoniums" in order to avoid the confusion, but the older common name "geranium" is still in regular use, and most garden 'geraniums' are in fact 'pelargoniums', as opposed to true geraniums or cranesbill. Species of Pelargonium are evergreen perennials indigenous to Southern Africa and are drought and heat tolerant, and can tolerate only minor frosts. Pelargoniums are extremely popular garden plants, grown as annuals in temperate climates. -- Wikipedia

This particular variety is one of my favorite of the showy geraniums. It sheds less than a standard geranium and makes great hanging baskets that stay beautiful through the entire season.

What a gorgeous flower!

Thanks you so much. It is one of the most favorite plants I have ever had in my garden.

Thank you Emma! I loved these.

Thank you Mayra..I have never been able to find them again since that summer.

I'm glad they are continuing to bring enjoyment in photos not just live in my garden. :)

I'm sure they are striking. Can't take my eyes off them :)

Thank you Geeta and Satyen. I love these. Unfortunately I cannot find them every season around here. They are striking and looked good all season outside.

@misako: thanks! Yes, it is a beautiful variation.