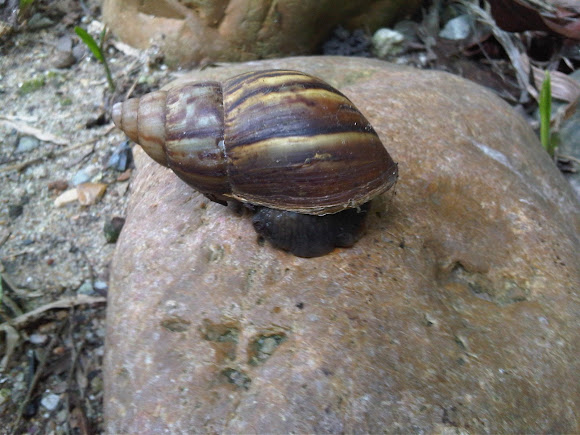 The East African land snail, or giant African land snail, scientific name Achatina fulica, is a species of large, air-breathing land snail, a terrestrial pulmonate gastropod mollusk in the family Achatinidae. As they develop rapidly and produce large numbers of offspring, this mollusc is now listed as one of the top 100 invasive species in the world. It is a voracious feeder, and recognized as a serious pest organism affecting agriculture, natural ecosystems, and human health and commerce. As such, it has been given top national quarantine significance in the United States. Quarantine officials have successfully intercepted or eradicated incipient invasions on the mainland in the past.

The East African land snail is native to East Africa, especially Kenya and Tanzania.It also lived in wet sand. Its habitat includes most regions of the humid tropics, including many Pacific islands, southern and eastern Asia, and the Caribbean. It is a highly invasive species, and colonies can be formed from a single gravid individual. The species has established itself in temperate climates also, and in many places release into the wild is illegal. The giant snail can now be found in agricultural areas, coastland, natural forest, planted forests, riparian zones, scrub/shrublands, urban areas, and wetlands.